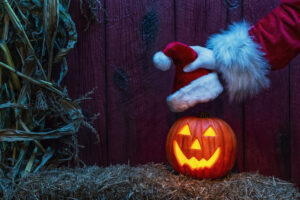 Labor Day is over, school supplies are gone, and stores have officially overloaded on Halloween decorations. Some even have Christmas items on their shelves!

How early is too early to decorate and look sane? Asking for a friend.

An unwritten rule tells us we’re “not supposed” to decorate for Christmas until after Thanksgiving. In fact, a 2015 poll found that more than 86 percent of people said that the entire month of November was too early to put up decorations. But is it? Really?

In a world full of stress and anxiety, I say it’s never too early. Self-care is important and if making your house look like the Griswolds’ in October makes you happy, you do you! Recent research has shown that people who decorate earlier are simply tapping into the excitement of the holidays before the rest of us–which makes them happier.

So, if your post-Halloween plans include putting up your Christmas tree, I won’t judge you. In fact, there’s a good chance I’ll be right behind you! I’ll be breaking out my Halloween decorations this week–’cause why not! Time seems to be moving too quickly these days so why not enjoy the spirit of any holiday a little longer?

Rita Pagan, DES, is IPMI’s director of events and exhibits.