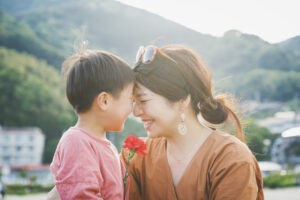 The modern holiday of Mother’s Day was first celebrated in 1907, when Anna Jarvis held a memorial for her mother at St. Andrew’s Methodist Church in Grafton, W.V. Her campaign to make Mother’s Day a recognized holiday in the U.S. began in 1905, the year her mother, Ann Reeves Jarvis, died. Ann Jarvis had been a peace activist who cared for wounded soldiers on both sides of the American Civil War, and created Mother’s Day Work Clubs to address public health issues. Anna Jarvis wanted to set aside a day to honor all mothers because she believed a mother is “the person who has done more for you than anyone in the world.” In 1914, Woodrow Wilson signed a proclamation designating Mother’s Day, held on the second Sunday in May, as a national holiday to honor mothers.

In Luke Bryan’s song, “Most People Are Good,” he says, “and most mamas oughta qualify for sainthood.” I don’t know about all that, but I know it’s a tough and important role! For this Mother’s Day, I hope to receive a call from my only son, who just graduated from Army Basic Training on Thursday, and whose 24th birthday is today. Because I have received only the first dose of vaccine, I was not permitted to attend the graduation ceremony. It’s heartbreaking not to be able to be there with him. (COVID strikes again!)

For us grammar geeks, we can see the argument to be made for Mothers Day (like Veterans Day?), Mothers’ Day (all moms), or Mother’s Day (one mom). But Anna Jarvis “specifically noted that ‘Mother’s’ should be a singular possessive, for each family to honor its own mother, not a plural possessive commemorating all mothers in the world,” Wikipedia tells us. Despite her preference, my message today is a thankful shout out to all the mothers, bonus mothers (I like this better than “step”), adoptive mothers, foster mothers, wannabe mothers, expectant mothers, Gold Star mothers, and mothers in heaven.