Chautauqua National Park: How the City of Boulder managed parking demand in one of the country’s most popular historical landmarks. 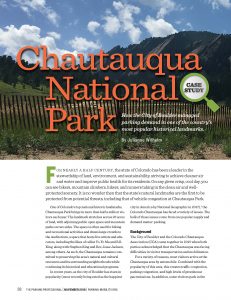 FOR NEARLY A HALF CENTURY, the state of Colorado has been a leader in the stewardship of land, environment, and sustainability, striving to achieve cleaner air and water and improve public health for its residents. On any given crisp, cool day, you can see bikers, mountain climbers, hikers, and runners taking in the clean air and well-protected scenery. It is no wonder then that the state’s natural landmarks are the first to be protected from potential threats, including that of vehicle congestion at Chautauqua Park.
One of Colorado’s top national historic landmarks, Chautauqua Park brings in more than half a million vis­itors each year. The landmark stretches across 26 acres of land, with adjoining public open space and mountain parks on two sides. The space is often used for hiking and recreational activities and draws large crowds to the Auditorium, a space that hosts live artists and edu­cators, including the likes of cellist Yo-Yo Ma and B.B. King, along with Stephen King and Rev. Jesse Jackson, among others. As such, the Chautauqua remains com­mitted to preserving the area’s natural and cultural resources and its surrounding neighborhoods while continuing its historical and educational programs.
In recent years, as the city of Boulder has risen in popularity (most recently being rated as the happiest city in America by National Geographic in 2017), the Colorado Chautauqua has faced a variety of issues. The bulk of those issues come from one popular supply and demand matter: parking.
Background
The City of Boulder and the Colorado Chautauqua Association (CCA) came together in 2015 when both parties acknowledged that the Chautauqua was facing difficulties in visitor transportation and mobilization.

For a variety of reasons, most visitors arrive at the Chautauqua area by automobile. Combined with the popularity of this area, this creates traffic congestion, parking congestion, and high levels of greenhouse gas emissions. In addition, some visitors park in the neighborhoods around the baseline of the park, which, although permissible, has become a challenge for the area’s permanent residents. Other issues included:
• Inadequate parking supply for peak times during the year.
• Parking issues in the surrounding neighborhoods.
• Quality of life for residents.
• Finding a place to park.
• Vehicle circulation issues.
• Pedestrian access issues to Chautauqua Park.
• Drivers not yielding to pedestrians at crosswalks.
• Overcrowded parked vehicles encroaching pedes­trian walk areas.
Planning
To find a solution to these specific issues, the Chautau­qua Access Management Plan (CAMP) was created. CAMP explored ways to manage existing demand for access to and from the Chautauqua area that mini­mized impacts to surrounding neighbors, visitors, and the area’s natural and cultural resources.
The CAMP pilot program was implemented to test a solution for three months in the summer of 2017. This pilot program would manage parking in the Chautauqua historic core and surrounding neighborhoods and pro­vide free shuttle service to and from Chautauqua from downtown and nearby parking lots. Once the three-month test was completed, the city of Boulder would assess the results for permanent implementation.

The Goal
The city of Boulder defined the following goals to be met during the testing period:
• Increased use of the free shuttle to and from Chautauqua.
• Reduction in traffic volume on Chautauqua’s Base­line Road/increased parking supply for peak times during the year.
• Reduction of conflicts between automobiles and pedestrians in highly trafficked areas.
• Reasonable compliance with parking restrictions.
• Reduction of parking throughout adjacent neighborhoods.
The Strategy
To balance the entry of the variety of users and modes while also maintaining the natural, built, and historic environments, the city of Boulder chose to place five pay-by-plate meters along the baseline of Chautau­qua in five specific paid parking zones (Chautauqua Green, Ranger Cottage Lot, Baseline Road, McClintok Trailhead, and North Neighborhood temporary NPP zone). The expectation was that some visitors to Chau­tauqua would park in one of the offsite lots and take the new free shuttle into the park. The shuttle would be funded by revenue collected by those who parked in paid-parking meter zones. During the three months, parking ambassadors would be put in place to answer questions about parking and shuttling, along with paid digital marketing to inform visitors before they arrived.
The meters would be actively tested from June to August 2017. From a series of surveys and research to find peak visitor times,3 it was determined that the meters would be active solely on weekends from 8 a.m. to 5 p.m. in the five specific areas. This totaled 26 days during 13 weekends. The meters would operate in pay-by-plate mode, which uses the customer’s license plate to identity the vehicle’s status in the WebOffice program, which allows compatibility with mobile pay­ment platforms along with supporting license plate recognition software for identification and enforce­ment purposes.
“The fact that the Cale CWT meters were compat­ible with mobile payment apps was very important in this process,” said Melissa Yates, access and parking manager for the city of Boulder, “Pedestrian foot traffic in the roads was already an issue. We wanted to mini­mize the risk of going back and forth to their vehicles to feed a meter, but instead enjoy all of their time inside Chautauqua Park.”
Results
Through data analysis,4 community questionnaires, and a stakeholder debrief, city staff determined that several goals were met through the three-month test pilot:
• Increase use of the free shuttle to and from Chau­tauqua. Not only did the meters help balance the amount of traffic at the Chautauqua baseline, the free shuttle ridership was a success. On average, 900 Chautauqua guests per day used the offsite parking to take the free shuttle into the park on the weekend. In addition, 10 percent of Chautauqua employees used the shuttle to get to and leave work, even though they had their own employee parking zone.
• Reduction in traffic volume on Chautauqua’s Base­line Road/increase in parking supply. On average, there was a 20 percent decrease in cars parked in the five paid parking zones, including Chautau­qua’s Baseline Road, resulting in an increase in parking supply. Including all parking areas, there was an average of 768 daily parking transactions during the pilot and a total of 19,958 paid parking transactions made specifically during business hours of the 13 weekends.
• Reduction of conflicts between automobiles and pedestrians in highly trafficked residential areas: Chautauqua staff and “cottagers” (part homeowners, part renters) expressed great satisfaction with the pilot, finding it easier to park within proximity to their residences or rental lodging and appreciation for the reduction in cars circling for parking. When surveyed, several people specifically noted that it was quieter within the historic core than it had been in past summers and that the increased sense of safety was prevalent.
• Reasonable compliance with parking re­strictions. Of the paid parking transactions, 64 percent used one of the five payment ki­osks, and 36 percent (7,216) used a mobile payment app. On some days, there were even more mobile payment transactions at Chautauqua than downtown. Parking enforcement regularly enforced the pi­lot parking zones to ensure compliance within the specific areas. An average of 49 violations were cited each day of the 26-day pilot. Most violations were cit­ed in the temporary no-paid-parking zone, which was reserved for employees of the park, with significantly fewer violations occurring in the other five zones.
• Reduction of parking throughout adjacent neighbor­hoods. Throughout the paid parking neighborhood zones around Chautauqua Park, fewer cars were parked in the study area in 2017 than in 2016, even during the weekdays when paid parking was not in place. On weekends, 48 fewer cars per hour were observed, and 35 fewer cars per hour were observed on weekdays during the pilot. When surveyed, residents within the neighborhoods re­ported positive results from the pilot, including less parking congestion, greater ability to access their own homes during the peak day time hours, and less trash and noise from parkers.
• Additional Success: Though the goal was not to make a profit from this pilot testing period, the total revenue made from the five pay-by-plate meters was $120,497. Of this, $80,000 was used to pay for the free shuttle, leaving $40,000 remaining in profit.
In addition, due to larger groups of pedes­trians getting off the shuttle to Chautauqua at once, there was an observed increase in driver compliance for yielding to pedestrians, from 74 percent in 2016 to 95 percent during the pilot in 2017. As stated by the City of Boulder council members, “Compliance generally improves with higher pedestrian volumes,” which result­ed in unforeseen added safety measures.
Summary
By implementing five pay-by-plate meters, the City of Boulder and Chautauqua Access Man­agement Plan successfully addressed current and potential transportation and mobility issues at the National Historic Landmark Chautauqua National Park. The creation of five paid-parking zones in the highest trafficked ar­eas surrounding Chautauqua park encouraged visitors to use the free shuttle and park their vehicles offsite.

In addition to increased parking avail­ability and less traffic congestion, height­ened pedestrian safety was noticeable on all fronts. Fewer cars reportedly prompted drivers to drive with more ease and yield to pedestrians, while groups of shuttle riders getting off at once also in­creased drivers’ yielding. Residents in the surround­ing area reported satisfaction with the pilot results, noting less parking congestion, greater ability to access their own homes during the peak daytime hours, and less trash and noise from parkers.
In an unforeseen result, the program’s revenue was substantially more than projected. After paying for the free shuttle with paid parking revenue, an additional $40,497 was left for future projects.
As documented in the 2017 Pilot Debrief by the City of Boulder Council Chambers, the CAMP Pilot Pro­gram was an ultimate success and should be an ongo­ing funded program for a period of 5 years. After eval­uating the data collection, stakeholder debriefs and community input, staff recommends that the majority of program components remain the same, extending the program to include holiday weekends such as La­bor Day and Memorial Day.
“The type of meter chosen for this project was vital,” concludes Melissa Yates, access and parking manager for the city of Boulder, “We needed one that had a strong back-end system, terminals that were easy to use by visitors, and of course, was compatible with mobile app payment.”
JULIANNE WILHELM is marketing coordinator with Cale America, Inc. She can be reached at julianne.wilhelm@caleamerica.com.