Blocking Off the Lot 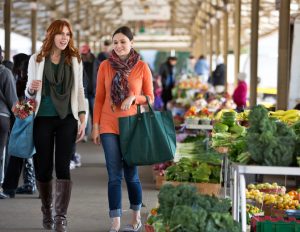 It sounded like a great idea at the outset: A small town near where we vacation recently secured a significant grant to close off a messy intersection and one of two entrances to its municipal parking lot and turn it all into a pedestrian plaza. Beautiful, greener, more welcoming, etc., and everyone was pretty excited about it.

There’s a large pavilion at the far end of that lot that hosts a farm market on Wednesdays and Saturdays (it’s home to a free movie on Tuesday nights and all sorts of community events the rest of the week—Lions Club chicken dinners, fundraisers, Boy Scout events, etc.) . Where I live the rest of the year, “farm market” is a bit of a dubious term that normally sees large quantities of food trucked in from far away to be set up on wood tables with a goal of feeling much more local and down-home than it is. But this market at the end of the parking lot is a real, local market for real, local farmers, who show up in battered Ford pickups, on John Deeres, and sometimes by horse and buggy to sell fruits, vegetables, meat, cheese, eggs, and sometimes candles and blankets and crafts made by their family members. When a chain went up to block that parking lot entrance in preparation for its transformation, those farmers were hit hard. Their sales dropped 30 percent the first weekend and didn’t come back up.

No one factored in the tourist part of the equation when they decided to turn a road into a pedestrian pathway. Locals knew where the other parking lot entrance is, but out-of-towners couldn’t find it (Waze doesn’t always work beautifully in small, out-of-the-way towns) and just gave up. Without their dollars, the farm market can’t survive. So after several weeks, a town meeting was called, the chains came down, and the whole plan is in question and will likely be scrapped. Sounded great on paper, but doesn’t work in the real world and that caught city officials completely off-guard.

It’s a small town and there is no parking professional around, but I wondered what might have happened if they’d asked one about the change before making it. My guess is, they’d have saved a lot of time, money, and frustration and probably come up with an equally beautiful but more practical plan.