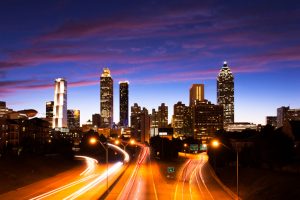 Last week’s fiery bridge collapse in Atlanta was top news all around the country, but the real story may end up being a new appreciation for—and much more use of—mass transit in and around the city.

“It was nuts,” says Mark Vergenes, chair of the Lancaster (Pa.) Parking Authority and president of MIRUS Financial Partners. He was enjoying a steak dinner with a client in downtown Atlanta when everybody in the restaurant turned to watch the burning bridge on television. It didn’t take him long to realize getting back to his airport-area hotel was going to be a huge challenge.

“Back roads were jammed,” he says. “They were stopping people on the road and turning them back the opposite way to get off the highway.” So he called Lance Lunsway, CAPP, senior director of parking and transportation services and new business development at Georgia Tech, for advice. Which was, “Take MARTA”— Atlanta’s commuter rail system.

“Three dollars and an hour and 15 minutes later, I was at the airport,” Vergenes says.

Lunsway says while the bridge collapse is a massive problem for the city that relies on it for commuting, Atlanta’s mass-transit system runs well and the city had an emergency plan ready to go, as did his university. “We’re running extra shuttles to MARTA and they’re adding more trains,” he says. “Nobody really panicked. There was a sense that we had to deal with this so we’d better figure it out.”

Atlanta schools are on spring break this week, which lightens the load on roads considerably. But many people have already started taking commuter trains and shuttles instead of driving to and from work and others have embraced carpools, so the number of cars on the road is significantly decreased from normal levels.

Lunsway suspects people might continue taking mass transit even after the bridge is replaced (he guesses that might take six months to a year), now that they’ve tried it, so the collapse might be a catalyst for the growth of alternate mobility downtown.

“We’ve been talking with Turner Broadcasting and some other groups about providing more shuttles from the MARTA station,” he says. “We started getting emails yesterday about that. We have Turner on one side of us and Coca-Cola on the other, so it’s pretty busy in our area. We might see some collaboration come out of this.”

Key, he says, was the city’s ability to pull out an alternate transportation plan and enact it. Vergenes says the city enacted the same plan it used for the 1996 Olympics, when driving downtown was a challenge. “Right away, the people on the news were offering options,” he says. “They had transportation officials on camera talking about staying home, teleworking, or using mass transportation or carpool, and they had maps showing different ways to get around. They enacted that emergency plan right away and seemed to handle it very well.”

Lunsway agrees. “The real test will be Monday when schools are back in,” he says. But the immediate reaction by the city was key. “There was a consolidated effort by our highway department and the police to get everybody [on that highway] turned around. People sat and waited for instruction, and then they did what authorities told them to.”

And, he says, the incident may have positive effects going forward. “This may be a catalyst for more transportation options.”