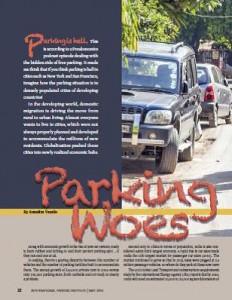 Parking is hell. This is according to a Freakonomics podcast episode dealing with the hidden side of free parking. It made me think that if you think parking is hell in cities such as New York and San Francisco, imagine how the parking situation is in densely populated cities of developing countries!

In the developing world, domestic migration is driving the move from rural to urban living. Almost everyone wants to live in cities, which were not always properly planned and developed to accommodate the millions of new residents. Globalization pushed these cities into newly realized economic hubs.

Along with economic growth is the rise of new car owners, ready to burn rubber and itching to find their perfect parking spot … if they can find one at all.

In Beijing, there’s a glaring disparity between the number of vehicles and the number of parking facilities built to accommodate them. The annual growth of 340,000 private cars in 2004 versus only 100,000 parking slots (both curbside and off-road) is clearly a problem.

Second only to China in terms of population, India is also considered Asia’s third-largest economy. A rapid rise in car sales made India the 11th-largest market for passenger car sales (2010). The market continued to grow so that in 2013, sales were pegged at 2.6 million passenger vehicles. So where do they park all these new cars?

The 2013 Global Land Transport and Infrastructure Requirements study by the International Energy Agency (IEA) reports that by 2050, India will need an estimated 10,000 to 20,000 square kilometers of surface parking area, an area equal to 35 times the size of the city of Mumbai or just a little smaller than entire state of California.

Many of the parking woes in developed countries are also present in the developing world. Aside from the disparity between the number of vehicles and number of parking slots available, there are also the issues of parking locations, lack of parking signage, informal parking, and inefficient policies causing altercations and accidents related to parking.

Parking Locations
Just as in cities in the U.S., parking demand in developing countries is dependent on location. As expected, highly commercialized areas need more parking slots compared with less urbanized zones. But to exacerbate the problem, there’s also a lack of garages in some urban residences.

In my city of Manila, Philippines, even parking at home is a problem. The sheer lack of space to park a car can drive owners to park their cars on the streets. Aside from the lack of security and traffic congestion this may cause, the practice also results in pedestrian accidents as a majority of sidewalks in the city are virtually non-existent. Pedestrians are forced to walk on the streets, sometimes even in the middle of traffic.

In a desperate attempt to remedy the problem, a Filipino congressman filed an unusual bill (House Bill 5098) requiring new car owners to provide proof of parking. Although almost nobody believes the bill will pass, it still underscores the need to provide effective parking management to address parking issues in urban areas.

Lack of Parking Signs
One of the most basic parking requirements is parking signs. A lack of parking signs and confusing signage can easily be the cause for other issues, such as unfair towing, altercations, and unpaid fines. As we all know, proper signage is especially important for on-street parking, but a lack of signs or missing signs anywhere causes confusion for drivers.

As it is, professionally made standard No Parking signs are sometimes treated more like suggestions rather than serious parking policies. Imagine what happens in a country with no parking budget or policy where residents use improvised cardboard signs written with a Sharpie?

Informal Parking Market
Parking in densely populated cities can also be an opportunity for corruption by local officials or area gangs. The market for informal on-street parking is driven mostly by demand for convenient parking spaces. Motorists are willing pay premiums for vacant, but illegal, parking spaces provided by officials who look the other way.

According to a study by the Inter-American Development Bank in Latin America, in Mexico, parking prices are between $0.70 and $3.80 per hour. In Guadalajara, it ranges from $1.50 to $2.30. Bogota rates may be as high as $2.70, and Buenos Aires is in the range of $1 to $2.12. The fact that drivers are willing to pay means that there is a real need for these facilities. For the local government, it is a wasted opportunity to raise funds. These additional taxes could’ve paid for other projects the community needs. But instead, the funds go to crooks who intimidate and harass drivers refusing to pay.

If there’s any hope for parking reform for the cities of emerging economies, it would be the creation and proper implementation of parking policies that make sense. These policies don’t have to be a one-size-fits-all solution for every country, as each country, city, and even city block have different needs.

Fortunately, there are organizations responding to this need. The 2011 study funded by Asian Development Bank, “Parking Policy in Asian Cities,” focused on providing insight about the different parking policies in Asian cities. The study recognizes the importance of parking, not only in the central business districts, or CBDs, but residential parking and commercial parking, as well. It looked at the different approaches to solving parking issues that could potentially improve the parking situation in the region.

It’s interesting to note that the parking predicaments the researchers uncovered were problems developed countries have faced before—namely, U.S. cities in the 1920s, Europe in the ’50s, Japan in the mid-’60s, and Hong Kong and Singapore in the ’70s. As culturally different as these countries are, it cannot be denied that in terms of economic growth, there are similar valuable lessons developing countries can learn from.

Conventional and Alternative Parking Policies
Back to Freakonomics. Stephen Dubner explains in very layman’s terms how the current conventional and mainstream free parking policy works: Four parking spaces per 1,000 square feet of store, three spaces per beautician for a salon, one space per 10 nuns, etc. I’m not sure if he’s kidding but the point is that there is a general lack of flexibility in the policy. Academics, including Donald Shoup, have pointed that out, and some cities, such as San Francisco, listened.

Would a program such as SFPark work in developing countries? SFpark eliminates the concept of free parking in San Francisco and instead charges drivers the “right” cost of on-street parking, relative to location and time. In this system, prices are dynamic, literally applying the law of supply and demand, almost in real time. According to Shoup, the right price of parking is achieved when at least one or two slots remain available in a given city block.

Not all cities in Asia may benefit from this system. Some cities have very low-volume on-street parking, but in cities such as New Delhi, Beijing, and Manila, where parking on the street is the norm, the system could certainly be implemented. Currently, on-street parking prices are set in a lot these cities, but the concept of dynamic pricing could prove to be the best solution.

SFpark’s smartphone app helps drivers check the availability and price of parking, and in some cities, such as Manila, traffic apps such as Waze are already in use. Resistance is to be expected at first, but in time, drivers would get used to the idea of a changing parking price, much like San Franciscans.

Privatization of Parking Facilities
Policing of parking violators takes expensive man-hours for the local government. Giving the responsibility of the parking security and maintenance to private contractors is another option for the city government to still earn income from public on-street parking while saving on overhead costs.

Off-Street Parking
Multi-level parking buildings are another solution to consider. Three of the largest malls in the world are in Metro Manila, but parking is no problem for shoppers thanks to the multi-level parking lot provided. The malls’ parking structures even provide parking spaces for establishments near the area. The relatively low cost of parking attracts drivers to the mall even if they didn’t plan to go there.

Implementing Parking Policies
No matter how many parking infrastructures and policies are created, the city government must have the political will to follow though and implement legislation. If not, the issue of parking will have a domino effect, affecting mobility, economy, environment, and the general well-being of the city’s people.

Annaliza Vasallo is a content team lead for Seton.com, a provider of workplace safety solutions. She can be reached at isabellaassmith@gmail.com.