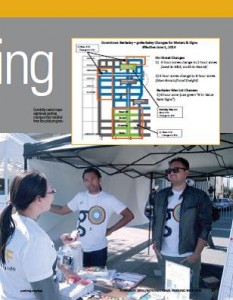 Berkeley, Calif.: the birthplace of the Free Speech movement, the first city to pass a tax on sugar, and the latest city to take on demand-based parking pricing? Though it sounds out of place at first, the City of Berkeley’s goBerkeley pilot is the municipality’s newest tool to address climate change and revitalize its economy.

As home to the University of California, Berkeley, the City of Berkeley is a willing participant in experiments and academic theory. So when businesses and visitors complained about lack of parking in downtown, the city looked for the best way to solve the problem without building more parking spaces because there was little money or real estate for additional parking.

Demand-based parking pricing—the idea that parking rates should be set to achieve one to two parking spaces per block at any time—was popularized by Donald Shoup and his University of California colleagues. However, in 2012, when planning for the goBerkeley pilot began, only the biggest cities (New York, Los Angeles, San Francisco, Seattle) or small towns (Old Pasadena, Redwood City) had put this theory into practice. What would happen when it was tried in a city of 113,000 that had few resources but a lot of opinions?

Getting Started
The goBerkeley pilot is intended to improve ease of travel within three key areas of the city, explore and test methods to reduce local traffic congestion, improve parking options, and promote alternatives to driving one’s own car in three of Berkeley’s commercial areas. Our team worked closely with local businesses before goBerkeley started adjusting parking policies. We asked local employees and visitors what they needed and how we could help improve access to Berkeley’s businesses. In other words, we started the process by communicating.

Incentives to Leave the Car Behind
The first step of the goBerkeley pilot was to encourage people to leave their cars at home. To start, Berkeley distributed 2,000 free transit passes to residents and employees. In addition, the city partnered with City CarShare to install six carshare vehicles and provided subsidies for businesses that wished to sign up. The goal was to keep people coming downtown without their vehicles, leaving precious parking spaces available for those who absolutely needed to drive.

Keep It Simple
The next step was to design a program that would be effective in shifting parkers from congested parts of town to low-use areas. To do that, we had to keep our message as simple as possible. We quickly discarded more sophisticated parking schemes, including rates that varied block by block or by time of day, because the public told us those policies were too complicated. Instead, we created standard zones that we marked with new, color-coded static parking signs.

Congested areas were marked with blue signs that offered premium rates for two-hour maximum stays, and low-use areas were marked with green signs offering value rates for up to eight hours. In customer satisfaction surveys, Berkeley parkers reported that their favorite parts of the pilot were the new signs and standard time limits; there was no confusion about where they could park or for how long.

Providing Choices, Not Disincentives
The goBerkeley pilot program was designed to provide choices. Yes, parking meters in congested areas now charged a higher rate, but metered spaces just a few blocks away offered lower rates than before and with higher time limits. The parking scheme was promoted as offering choices to the parker: find a parking space without circling and pay a higher rate or drive a few blocks away to park for cheaper and longer. Along with the visual cues from the parking signs, this concept caught hold and improved parking conditions—the number of blocks in downtown that were too full dropped from 37 percent to 25 percent.

Longer Time Limits Don’t Really Hurt
Before the pilot started, time limits at metered parking spaces ranged from 30 minutes to two hours. The public reported that this confused them and didn’t give them enough time to complete their errands, dining, or shopping. An eight-hour time limit was introduced in areas with very low parking occupancy to provide an incentive for parkers. A few days after the change, these low-use areas became very popular! However, our data showed that people were not parking for eight hours; rather, they averaged three to four hours of parking, but drivers reported liking the flexibility of being able to park for longer if they felt like it.

As part of the pilot program, we also tracked the conditions in neighborhood streets around the commercial areas to determine whether spillover, or drivers avoiding meters by parking on residential streets, was occurring. Had we detected spillover the police department could have increased traditional enforcement and/or deployed more efficient enforcement technology. However, this action was not required.

Overall, longer time limits may have been one of the key factors to spreading demand from the congested areas to low-use areas and making the best use of all Berkeley’s parking spaces.

Collect Data, Cheaply if Possible
The goBerkeley pilot relied on tried-and-true methods of data collection, manually counting the number of parked cars and performing questionnaires of businesses, employees, visitors, and drivers. These methods are simple to replicate and, most importantly, dependable. Berkeley did not have the resources to install and manage advanced technology, such as in-ground parking sensors, but we made use of the technology available to us.

Berkeley recently ran a demonstration that showed that the two technologies together provide the data that we need to adjust rates at relatively low cost.

Data-Driven Decisions, Not Revenue
The goBerkeley pilot’s goals were to improve parking conditions in a way that reduced congestion from parking search traffic and supported the business community. The tools happened to include adjusting rates up or down. Adjustments will occur based on data and only to reach the stated targets of one to two parking spaces per block. The goal is not, has never been, and will never be to raise revenue for the city. This paradigm has been critical to the success of the goBerkeley pilot and was the biggest change in the way that citizens viewed the city’s management of parking.

Trust Your Operation Departments
Last, but not least, the biggest lesson learned from the goBerkeley pilot is the importance of the city staff that run the parking system. The city’s meter maintenance division, streets division, and parking enforcement professionals were key in translating academic theories into real-world success. Their feedback to parking planners about what the driving public would accept and understand was critical to the design of the ultimately simple parking scheme.

These field operations departments can also tell you what the signs and meters can do, what can be maintained into the future, and when you’re off track—they care deeply about their jobs and their city and will do the job right. Berkeley’s decision to work with existing staff, departments, and resources instead of depending on contractors or temporary help was a big one.

We will evaluate the effect of the goBerkeley pilot program and make recommendations about each aspect of the program to the Berkeley City Council this spring for a decision on whether to continue in the future. Based on the data and feedback, the pilot has been effective and popular, but the lessons learned will be useful to Berkeley and other cities, regardless of the outcome.

Danette Perry, CAPP, is parking services manager with the Public Works/Transportation Division of the City of Berkeley. She can be reached at dperry@ci.berkeley.ca.us or 510.981.7057.

Willa Ng, PE, is a principal planner with the City of Berkeley. She can be reached at wng@cityofberkeley.info or 510.981.7064.