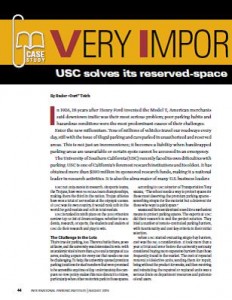 In 1926, 18 years after Henry Ford invented the Model T, American merchants said downtown traffic was their most serious problem; poor parking habits and hazardous conditions were the most predominant causes of their challenges.

Enter the new millennium. Tens of millions of vehicles travel our roadways every day, still with the issue of illegal parking and cars parked in unauthorized and reserved areas. This is not just an inconvenience; it becomes a liability when handicapped parking areas are unavailable or certain spots cannot be accessed in an emergency.

The University of Southern California (USC) recently faced its own difficulties with parking. USC is one of California’s foremost research institutions and its oldest. It has obtained more than $590 million in sponsored research funds, making it a national leader in research activities. It is also the alma mater of many U.S. business leaders

USC not only excels in research. Its sports teams, the Trojans, have won 96 NCAA team championships, making them the third in the nation. Trojan athletes have won a total of 287 medals at the Olympic Games. If USC was its own country, it would rank 12th in the world for gold medals and 11th in total medals.
USC is ranked in ninth place on the 2011 Princeton Review top-10 list of dream colleges. Whether in academia, research, or sports, the students and leaders of USC do their research and play to win.

The Challenge in the Lots
That’s true for parking, too. There’s a battle there, as we all know, and the university was determined to win. With an academic staff of more than 4,700 and a campus of 226 acres, finding a space for every car that needs one can be challenging. To help, the university opened premium parking locations for staff members that were promised to be accessible any time of day. Unfortunately the campus’s no-tow policy makes this rule difficult to follow, particularly when other motorists park in those spaces.

According to USC Director of Transportation Tony Mazza, “The school needs a way to protect spaces for those most deserving the premium parking spaces—something simple for the motorist but a deterrent for those who want a quick space.”
Mazza and his team identified a need for a mechanical means to protect parking spaces. The experts at USC did their research to find the perfect solution. They tried a number of remote-controlled parking barriers, with functionality and cost key criteria in their initial selection.

When USC started evaluating single-bay barriers, cost was the No. 1 consideration. It took more than a year of trial and error before the university seriously considered buying more expensive barriers than those frequently found in the market. The cost of repeated removal of defective units, sending them for repair, being without the product for weeks, and then receiving and reinstalling the repaired or replaced units was a serious drain on department resources and patience of end users.

Eventually, USC found a single-bay, remote-controlled barrier that uses the weight of the car instead of a battery to create the energy needed to raise the arm. The reduced drain on the batteries in this system allows them to function for two years or more.

The idea for a remote controlled-parking barrier was originally conceived by Designated Parking co-founder Jim Rittenhouse as a sort of advanced garage door opener for people without garages after he read about a shocking number of cars stolen from home driveways in Japan. The company’s founders came up with the idea of a self-powered barrier that would block the entrance and exit of cars from their designated parking spots or driveways. Originally, the technology was conceived to both reserve parking spaces and prevent theft of cars.

“The company’s Japanese market wanted the device to look intimidating, rather than something that could be easily overrun or damaged.”

The system protects against unauthorized access to parking spots, ramps, and driveways. Authorized users activate a small remote control to drop the barrier that blocks a pre-designated parking space. After the vehicle backs out of the parking space, the barrier can be raised by the remote or programmed to rise automatically.

Passing the Test
At USC, students learn from practical experience, not just academics. So was the case with Mazza and his team when it came to getting the perfect parking barrier.

Having learned from experience that products that sound great in theory do not always work on delivery, Mazza and team tried the first barrier system on a bench to ensure it worked as expected. It did not. After some hand-wringing, help from the manufacturer solved the problem; unlike other systems, the one USC chose must be driven on (or jumped on) to make it rise. The weight of the vehicle is used to produce energy, so unless the unit is driven on, that energy doesn’t exist. Once that was clarified, the lab test continued with someone jumping on the unit to make it rise.

Testing also found another great benefit of USC’s new system. Maneuvering cars in tight spaces inevitably causes bumping and slow-speed hits on the barriers. The unit chosen by the university has built-in torque clutch defense that absorbs all but the most determined collisions. During such attacks, the barrier yields, but once the offending force is removed, the barrier bounces back to its previous position.

Not Just the Back Up-Plan
Parking barriers are a must-have for the growing trend of car sharing, which is one of many creative ideas to help control the flow of traffic and parking on campuses and in municipalities. These systems allow a motorist to rent a car for however long he needs and pick it up at a central location. He can then return the vehicle at any other designated car-sharing spot. Barriers ensure that certain spaces remain clear for the vehicle’s return every time.

Barrier systems are instrumental in preventing illegal and unauthorized parking in public areas, too. They keep vehicles out of no-parking areas, handicapped spots, and emergency areas reserved for fire trucks or ambulances.

Making the Grade
At USC, VIP parkers are thrilled with their reserved spaces.

“Many of our staff comes in to their offices at varying times of day. [Our system] enables our premium parkers access to their spaces 24/7. They will always get here, knowing that they can easily park and get to where they are going,” Mazza says.
The barriers have been in use on USC VIP spots for about three years and have proven quite effective in keeping those spaces available.

Mazza says good research is what led USC to find this winning option for the iconic university. “The people who have these spaces truly appreciate that their spots are always waiting for them,” Mazza said. “And for us, that means we are serving our customers the right way.”