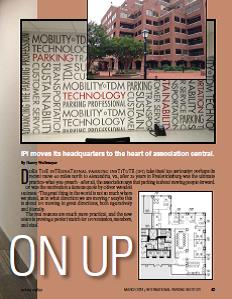 Does the International Parking Institute (IPI) take itself too seriously? Perhaps its recent move 40 miles north to Alexandria, Va., after 25 years in Fredericksburg was the ultimate practice-what-you-preach—after all, the association says that parking is about moving people forward.

Or was the motivation a famous quote by Oliver Wendell Holmes: “The great thing in the world is not so much where we stand, as in what direction we are moving.” Maybe this is about IPI moving in great directions, both figuratively and literally.
The real reasons are much more practical, and the new office is proving a perfect match for IPI’s mission, members, and staff.

Behind the Move
Next to the federal government, the largest employer segment in the Washington, D.C., metro area is associations and not-for-profit organizations. Washington, D.C., has the largest concentration of professional associations in the country, but Alexandria, Va., is close behind in fourth place (New York and Chicago are two and three, respectively, on the list).

Moving to the Washington, D.C., metro area allowed IPI to rejoin its association colleagues in and near the city, improve its operational efficiencies, and boost its ability to serve its members. There were quite a number of reasons to relocate the
IPI headquarters; the primary ones were:

Professional Development. The association for association professionals, the American Society of Association Executives (ASAE), is headquartered in Washington, D.C., and provides the specific training and educational opportunities that are most beneficial to IPI staff. By moving to the D.C. area, IPI is able to much more easily and less disruptively send staff to train with their peers.

Accessibility. Being in the D.C. metro area provides the proximity to three major airports and a train station that allows for much easier and cost-effective opportunities to have meetings of IPI committees, board, executive committee, and other workgroups. It also provides the opportunity for cheaper and more effective staff travel. In fact, IPI hosted three meetings during the first week in its new office that would not have been possible at the former location.

How Did it Happen?
At its October 2012 meeting, the IPI Board of Directors approved the move of the association from Fredericksburg to the Washington, D.C., metro area when the Fredericksburg lease expired.

From October 2012 to April 2013, IPI worked with commercial real estate firm Studley to identify the appropriate building in the appropriate location with regard to size, rent, amenities, space layout, safety, public transportation, and parking. During this time, IPI reviewed and/or toured more than 50 properties in Maryland and Virginia.

The Office
Alexandria was recently featured in a Washington Post article covering its robust urbanization. The article described the northeastern part of Alexandria as becoming transit-oriented and walkable and being transformed by higher density, mixed-use development, and redevelopment. All of this development is financed primarily through private investment and is making the city more urban and urbane.

IPI’s headquarters is part of the four-building Braddock Metro Center campus, is steps from the Braddock Road Metrorail station and rail right-of-way, and nearby multifamily housing developers are rapidly revitalizing the neighborhood. Six new residential infill projects are under construction or soon will be. Together, they encompass more than 1,500 units and more than 2,000 square feet of ground-floor retail space.

On-premise amenities IPI staff and visitors will enjoy include a fitness center, café, outdoor seating, and a soon-to-be-built conference center that will enable IPI to host meetings in state-of-the-art facilities.

IPI’s new headquarters is served by Metro (the building is just one stop from Ronald Reagan National Airport); shuttle service to King Street in historic, waterfront Old Town Alexandria, Capital Bike Share, and of course parking. It is a five-minute drive to the airport and a 10-minute drive to downtown Washington, D.C.

Our Welcome Mat Is Out
Please come visit us, whether by car, bike, train, walking, or another means. We would love to show you the new space.

Henry Wallmeyer is a staff member with IPI and executive director of the Association for Commuter Transportation. He can be reached at wallmeyer@actweb.org or 540.845.3146.