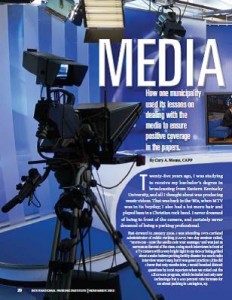 By Gary A. Means, CAPP

T wenty-five years ago, I was studying to receive my bachelor’s degree in broadcasting from Eastern Kentucky University, and all I thought about was producing music videos. That was back in the ’80s, when MTV was in its heyday; I also had a lot more hair and played bass in a Christian rock band. I never dreamed of being in front of the camera, and certainly never dreamed of being a parking professional.

Fast-forward to January 2008: I was attending IPI’s Certified Administrator of Public Parking (CAPP) two-day seminar called, “You’re On!—How the Media Gets Your Message,” and was just as nervous as the rest of the class. Doing mock interviews in front of a TV camera with a very bright light in my face or being grilled about a make-believe parking facility disaster in a mock radio interview wasn’t easy, but it was great practice! Little did I know that only months later, I would be asked difficult questions by local reporters when we rolled out the LEXPARK program, which included not only new technology but a 400 percent rate increase for on-street parking in Lexington, Ky.

Open Records Requests
Last year, the Lexington and Fayette County Parking Authority (LPA) received an open records request from our local paper, the Lexington Herald-Leader. The request was very broad in scope and included several years of citation data, including personal data such as names and addresses of vehicle owners. I was a little nervous about what they were up to and was reluctant to release so much information from our database, but after receiving advice from the city of Lexington that we should comply, we reluctantly did.

Several weeks went by before the Herald-Leader investigative reporters got back in touch with us, asking many new questions about the data. This time we took the approach, “If you can’t beat them, you might as well join them,” and were as helpful as possible answering the reporters’ questions. We could tell by the amount of time and research the paper was spending on this topic that it would be some sort of feature story and we were very nervous about the outcome.

The story was published on March 23, 2013, on the front page of the paper. The headline read. “Doing fine: LEXPARK has improved Lexington’s parking enforcement.”

What we initially believed to be a sort of witch hunt turned out to be a very positive story that shed light on the hard work and improvements that the LPA made since taking over parking from the city. Reporters Josh Kegley and Linda J. Johnson wrote an 1,800-word story with lines such as:

“Cars parked at expired meters—or otherwise parked illegally—are nearly three times as likely to wind up with a ticket on the windshield than they were five years ago. The increase in parking citations is courtesy—if you will—of the efforts of the Lexington Parking Authority.

“About five years into the program, the Parking Authority has established a self-sufficient organization that writes more tickets, makes more money and provides the city with a more concentrated effort to pursue scofflaws. The money from fines has been used to modernize and improve parking services and help repair aging garages such as the Annex Garage downtown, which is undergoing a $3.1 million restoration.”

The story also included great quotes from individuals that included a city councilman: “The Parking Authority has been a real value to our community,” said George Myers, an Urban County councilman, “It has really shone light on what our true parking situation is downtown.”

And Lexington’s commissioner of finance: “When the city ran things, money from fines and fees could be used for other budgetary needs,” said Bill O’Mara, Lexington’s commissioner of finance. “The loss of income is not a major blow, though, because the city did not collect much to begin with due to funding and staff shortages,” O’Mara said. “When the city had it, the assets were underperforming. It was marginal what kind of return they had on an annual basis,” he said. “The Parking Authority has been … making money each year that can be reinvested in parking.”

They also printed this quote from a downtown business owner who received 148 tickets (more than anyone else in the city) since 2007: “Even though I hate getting tickets, it’s easier to find parking downtown.”

Through our experience with the reporters and this story, we learned a valuable lesson in working with the media: you really can help shape the story if you help reporters do their jobs.

Just a little more than a week later, the Lexington Herald-Leader Editorial Board published a short piece about the creation of the parking authority entitled, “Lexington’s parking move is paying off.” It included the following:

“Five years ago public parking in downtown Lexington was a mess. It was hard to find a space and parking structures were poorly maintained. The job of writing tickets fell to police officers, which they only did when they didn’t have anything better to do, which wasn’t often. The city handled collections but that also was a low priority so barely half of tickets written were ever paid. The small amount of money collected went into the city’s general fund and so wasn’t designated for maintaining or upgrading either parking facilities or enforcement. That’s all changed, as a recent analysis by the Herald-Leader’s Josh Kegley and Linda Johnson showed. The jobs of managing public parking, writing and collecting fines and planning for better, more efficient parking were consolidated in 2008 under the Lexington Parking Authority. Finally, parking was someone’s priority. But the goal isn’t just to harass parkers and collect more money, it’s to make more parking available, and that’s happened, too. With better enforcement, people who work downtown no longer use metered spaces to park all day, freeing hundreds up for customers who come to the city center to do business, eat, shop, or be entertained.”

The newspaper’s board members would not have known those details had we not worked to give reporters an understanding of our mission.

Lightning Strikes Twice
Not too long after those stories came out, we received another open records request from WKYT, our local CBS affiliate. They requested a list of the individuals with three or more outstanding citations. This time we were much more accommodating, still a little apprehensive, but very willing to help with the story. The reporter Kristen Kennedy tells me that at first they planned to do a piece on the people who hadn’t paid up.

“But,” Kristen said, “after speaking with LEXPARK leaders, we realized their frustrations at not getting people to pay were more compelling.” She added, “We worked with those leaders to set up a ride-along, to show viewers just how difficult their jobs can be. In the end, working with LEXPARK—talking with leaders, doing a ride-along—proved far more beneficial for both parties than just crunching numbers from an open records request.”

At the LPA, we certainly have learned our lessons on working with the media and the benefits of providing them with as much information as possible to help shape a story.

One Final Thought
Try to get on a noon show or radio talk show! Noon shows or any local media interview type shows are a perfect format for getting the word out about a new facility, new program, rate change or an upgrade in technology. They are always looking for things to talk about that affect the community. Plus, the format is friendly and allows you to get your story out there. We have been privileged to be on three noon show programs on two different television stations in the past five months, talking about our garage renovation work and upgrades in parking technologies.

Gary A. Means, CAPP, is executive director of the Lexington Parking Authority. He can be reached at gmeans@lexingtonky.gov or 859.233.7275.