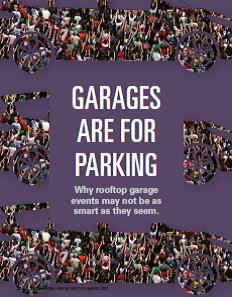 There has been a lot of news recently about a variety of people-
gathering events being hosted in parking garages (see p. 28 for one). Some of them include the following:

Before you decide when to host an event in your parking garage, it is important to know if you should allow it at all. Parking garages can be designed to accommodate large gatherings of people, but most are not intended to be used for anything beyond the storage of passenger vehicles. People-intensive events, such as those noted above, generally should not occur in parking structures.

Most garages are designed primarily for the storage of passenger vehicles, not the gathering of people. Open parking garages are specialized storage structures that differ significantly from other building types. The building code recognizes this by allowing many special provisions for open garages that are not permitted for other building types. Garages that have a low number of occupants are considered a low hazard. Assembly occupancies where large gatherings of people occur represent higher hazards and the building code has greater life safety requirements for them, particularly in three main areas.

Structural Loading
Which is heavier: a person or an automobile? Obviously, a car weighs more than a person. This may contribute to a common misperception that garages are designed for heavy loads because cars weigh a lot. Now consider which of the two is heavier on a weight-per-square-foot basis.

Consider a 9-foot wide by 18-foot long parking stall with its 162 square feet of area. A 2010 Cadillac DTS—a large passenger vehicle—weighs about 4,000 pounds. With five adult passengers weighing 200 pounds each, the total weight is 5,000 pounds. If you divide this weight by the area of the parking space, the result is approximately 31 pounds per square foot (PSF). That’s fine, because the building code requires parking garages for passenger vehicles to be designed for a minimum of 40 PSF of live load.

If you take the same area of the parking stall and assume two square feet per person, there could potentially be 81 people there instead of the Cadillac. If each person weights 200 pounds, the total weight on the stall area would be 16,200 pounds or 100 PSF. Per the building code, assembly occupancies such as theaters, dance halls, and restaurants where large numbers of people can congregate have a minimum live load design requirement of 100 PSF. This is two and a half times greater than the loading requirements for a parking garage! Parking garages are designed for a lesser live load than most other building types. Cars are not heavy on a square-foot basis.

There are stories of dances being held in garages where the floors of the structure bounced significantly as scores of people danced in unison with the music—check out YouTube if you need proof. Most garages are not designed to accommodate the live load requirements needed for large gatherings of people. Damage can occur to the structure when it is overloaded. Obviously, from a structural perspective, assembly-type events generally should not be held in parking garages that weren’t designed to accommodate them.

Fire Protection Systems
According to the International Building Code (IBC), open parking structures are not required to have:

These are special provisions afforded open parking garages due to their unique characteristics, such as low-hazard and low-occupant load. By comparison, assembly uses generally have more and more stringent life safety requirements. Most open parking garages are not designed with the additional fire protection provisions necessary to host gatherings. Doing so creates a hazard to the health and life safety of the public.

Consider an area 123 by 272 feet, which equates to a garage footprint of 33,456 square feet that can park approximately 108 cars. If it is a parking garage, the building code assigns a floor area of 200 square feet per occupant, resulting in 168 occupants (33,456 SF/200 SF/occupant) for the floor area. The width of the stairways must be equal to or greater than the occupant load multiplied by .3 inches per occupant, assuming it is un-sprinklered, as most open garages are not required to be sprinklered. This results in 50.1 inches of required stairway width. Because a minimum of two exits at a minimum width of 44 inches each are required by code, 88 inches of exit width are provided. Accessibility requirements may require even wider stair width minimums.

Now, assume only 10,800 square feet of the garage floor are to be used for a banquet or an event with tables and chairs. The building code assigns a floor area of 15 square feet per occupant for this type of unconcentrated assembly without fixed seats. This will result in an occupant load of 720 (10,800 square feet divided by 15 square feet per occupant) for the floor area. The required stairway width must be equal to or greater than the occupant load multiplied by .3 inches per occupant. This results in 216 inches of required stairway width (720 x .3 inches per occupant) but only 88 inches of exit width exists in the two stairs of a garage. There is insufficient exit capacity! Also, when there are more than 500 occupants, three separate exits are required. Finally, the allowable travel distances to exits in garages and assembly-use buildings are different.

Ultimately, the authority having jurisdiction, such as the fire marshal or other building official, will determine what is allowed and permissible in their territory. If they know or are informed that an open garage generally has a 40 PSF live load with no sprinklers, no fire alarm, no mechanical ventilation, no enclosed stairs, and a low occupant load compared to a comparably-sized assembly building’s 100 PSF live load, sprinklers, fire alarm, enclosed stairs and high occupant load, it is likely they will not allow an assembly event to occur in a parking garage.

Obviously, parking garages generally are inadequate as venues for people-gathering events when viewed from a structural, fire protection, and exit capacity perspective. Typically, parking garages are for the storage of passenger vehicles, not parties.

William F. Kavanagh, AIA, NCARB, is director of parking design at the Harman Group. He can be reached at bkavanagh@harmangroup.com or 610.337.3360 x118.