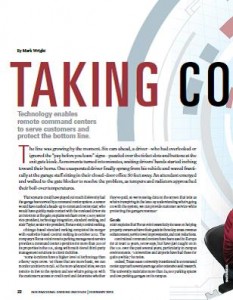 The line was growing by the moment. Six cars ahead, a driver—who had overlooked or ignored the “pay before you leave” signs—puzzled over the ticket slots and buttons at the exit gate kiosk. As moments turned into minutes, waiting drivers’ hands started inching toward their horns. One exasperated driver finally sprang from his vehicle and waved frantically at the garage staff sitting in their closed-door office 50 feet away. An attendant emerged and walked to the gate blocker to resolve the problem, as tempers and radiators approached their boil-over temperatures.

That scenario could have played out much differently had the garage been served by a command center system. A sensor would have flashed a heads-up to command center staff, who would have quickly made contact with the confused driver via an intercom at the gate, explains Michael Drow, CAPP, senior vice president, technology integration, Standard Parking, and Blair Taylor, senior vice president, Focus Point/Central Parking.

Chicago-based Standard Parking completed its merger with Nashville-based Central Parking in October 2012. The company’s Focus Point remote parking management service provides a command center operation for more than 200 of its properties in the U.S., along with multi-tiered third-party management solutions to client facilities.

“Some locations have a higher level of technology than others,” says Drow. “At those that are more basic, we can monitor an intercom call. At the more advanced sites, we can remote-in live to the system and see what’s going on with the customer’s access or credit card and determine whether they’ve paid, so we’re seeing data on the screen that tells us what’s transpiring in the lane. By understanding what’s going on with the system, we can provide customer service while protecting the garage’s revenue.”

Centralized command centers have been used in Europe for at least 15 years, Drow
says, but have just caught on in the U.S. over the past several years, particularly in campus environments. “Universities and airports have had these for quite a while,” he notes.

“We saw a number of sound (command center) examples when conducting site visits among our parking peers and gained great insight and ideas as to what works,” says Doug Williams, director, transportation services, Texas A&M. “We started with an on-site security booth at our first garage. As we increased the number of garages, we quickly learned the expense of re-creating the effort for each facility. We were able to combine five garages into one response facility for all garages. We saved $500,000 annually in security officer charges once implemented.”

Today, Texas A&M’s command center staff has the ability to view all garages and gates. At the same time, several pan tilt zoom (PTZ) cameras on high buildings allow them to view broad areas of the campus. The cameras and intercom systems can all be viewed and operated online.

“We also upgraded our multiple PARC systems to a unified T2 FLEX system,” explains Williams. “Everything has to be network accessible and have the capacity necessary to conduct business. For example, we currently use 150 terabytes of storage for our video system.”

Command centers reduce labor expenses and provide better customer service in garages, especially those that are automated, says Drow. “The Focus Point Command Center is headquartered in Austin, Texas, and it’s a 24-hour operation. We can see exactly what’s happening with a ticket. At any given time, we have 15 people in our command center, plus we have a wall of monitors. We can see traffic lane cameras all around the country and we can detect a backup before a customer even calls us on the intercom.”

“We’re our clients’ eyes and ears,” Blair adds. “Their people can’t be there all the time, but we can, and we detect problems before they escalate. We can actually call the customer on the intercom to ask if they have a problem. A driver might be sticking a credit card in the ticket slot or vice versa, but our system enables us to respond as if we’re standing right next to them.”

Command centers can also leverage technology to ensure that revenue is being captured after staff goes home, Drow says. “At a lot of facilities, the gates go up and people go home when the business day is over, but with our system we keep the gates down every day 24/7. That means higher ticket capture—customers can’t just wait until your staff leaves and then exit without paying.”

Of course, some customers will push the envelope. Texas A&M found that its command center provided a secret weapon against customer protestations: data.

“There is an amazing amount of data available,” notes Williams, “and everyone in the department has access to it. Customer challenges based on falsehoods often result in hasty retreats when they realize we have so much data at our fingertips. We can create very customized access solutions for a wide array of customer challenges.”

Collecting and analyzing all that data also facilitates predictive problem solving, says Drow. He says each call from a Focus Point-managed facility is monitored, and information about each call is entered into a database for tracking. Too many calls of a certain type from a particular garage precipitate a diagnostic and decision-making process.

“Maybe that facility needs better signage or different equipment, for example,” he says. “We can see what’s happening and make a decision on how to best address the problem. With our knowledge base and our working relationships with various control system manufacturers, we can determine which ones have the best fit.”

Drow says the company also makes a full suite of back-office services available, including accounts receivable, validation fulfillment, statement preparation, reporting, and more, all from its centralized office. “The ROI for equipment, automation, and management is very attractive,” he says, adding that it normally offers cost recovery within two years from labor savings, synergies, and captured revenue.

Making it Happen
Moving to a command center approach takes time and planning. “A project of this scale can’t happen overnight,” says Williams. “It has taken years to put together the system we really wanted. Additionally, we keep reinvesting as technology improves.”

Moreover, adopting new technology and integrating systems often brings surprises. Williams says building the university’s IT network and infrastructure with dedicated fiber and necessary bandwidth was critical, yet also posed intermittent challenges and delays. One of the primary issues they faced during the initial transition to centralized command was “networking older analog camera systems into a new digital world,” he says.

“It takes some time to get operations converted and upgraded to a point where the system meets everyone’s expectations,” he explains. “The technology initially chosen didn’t perform to our expectations. It took several reiterations and a number of years.”

Other transition issues include determining how best to use technology effectively, making sure communication is seamless (so the customer won’t know he’s talking with someone 2,000 miles away, for example), and learning new procedures.

“We’ve made a serious investment in procedures and training and technology infrastructure to support different operations around the nation,” Drow says. “We had to be able to support any revenue control system—there are seven or eight providers out there today—so we had to develop procedures to work with all those.”

Williams also notes the importance of training. “There is a learning curve when
moving from individual stations to a centralized command center,” he says. “It wasn’t a matter of retraining [staff] about how to handle business, but rather helping them to learn efficiencies so they became adept at handling the increased volume caused by having all intercoms and camera images monitored at the same time from one location.”

Benefits and Cautions
Williams says Texas A&M has realized a number of benefits since its conversion to centralized command. While the command center approach “is not cheap, the benefits make your entire organization better.”

He says the advantages include clearer and less frequent audio communication as the equipment and processes become more reliable; multiple redundant methods for controlling gates so every gate in the system can be raised from one command during an emergency; improved recording of audio, video, and transactions; and improved reporting of events/incidents.

He says the university posts signage in all the garages to inform customers that video cameras are in use.

The command center approach isn’t necessarily ideal for every parking operation. “Scale is the key,” says Drow. An operation needs to be able to invest not only in technology infrastructure but also in training so staff will have the competencies they need to handle customers’ questions and issues.

Blair added that for its part, Focus Point isn’t a one-size-fits-all service. Some operations want and need a human presence, while others are more suited to automation or some mix of the two. He says the level of intensity can vary, and they might simply provide off-hours monitoring if that’s all an operator needs.

“We adapt our services to the facility,” he says. “Each one is unique.”

Mark Wright is contributing editor to The Parking Professional. He can be reached at mark@wrightscontent.com.