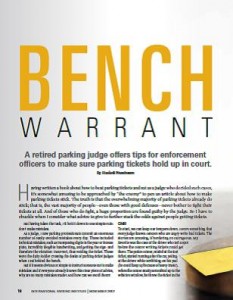 Having written a book about how to beat parking tickets and sat as a judge who decided such cases, it’s somewhat amusing to be approached by “the enemy” to pen an article about how to make parking tickets stick. The truth is that the overwhelming majority of parking tickets already do stick; that is, the vast majority of people—even those with good defenses—never bother to fight their tickets at all. And of those who do fight, a huge proportion are found guilty by the judge. So I have to chuckle when I consider what advice to give to further stack the odds against people getting tickets.

But having taken the task, I’ll boil it down to one simple rule: don’t make mistakes.

As a judge, I saw parking professionals commit an enormous number of easily-avoided mistakes every day. These included technical mistakes, such as transposing digits in the year or license plate, incredibly illegible handwriting, and getting the sign–and therefore the violation–incorrect, thus voiding the ticket. These were the daily fodder crossing the desks of parking ticket judges when I sat behind the bench.

But if it seems obvious or simple to instruct someone not to make mistakes and if everyone already knows this clear piece of advice, why are so many mistakes made? And how can we avoid them?

Chill
To start, we can keep our tempers down. Here’s something that every judge knows: officers who are angry write bad tickets. The stories are amusing, if bordering on outrageous. My favorite was the case of the driver who left a spot before the officer writing tickets could get there. The police officer, miffed at the lost ticket, started running after the car, yelling at the driver while scribbling on his pad (he could keep up because of heavy traffic). When the officer finally scrambled up to the vehicle’s window, he threw the ticket in the startled driver’s face and yelled a profanity. Needless to say, there were numerous problems with such a ticket.

There are also often problems with tickets when ticket-writers are too literal. How many times must judges hear complaints about tickets being written just seconds after the driver’s time expired at the spot? Is there some kind of race among those who issue tickets to see who can slap down a citation the quickest? Is there a kind of wild west gunfighting contest going on? On your mark, get set, draw your pens…now cite! I’m not advocating laziness here, but when we see tickets written this way, it’s impossible not to think that they’re being written for a quota instead of because they’re deserved.

The Golden Rule
This brings up a more general principle: don’t be a louse. It’s surly to issue a ticket to someone who is running down the block towards his or her car just as the meter runs down. Even without a grace period as part of the law (when I was judging in New York, the unofficial rule was to give people a few minutes’ break on many time-sensitive violations, albeit not for meters), it’s a sign of compassion and humanity to give someone the extra minute to get behind the wheel. This goes directly to policy in many municipalities and to training. Are you trained to pounce on the opportunity to give a ticket? Or to serve the public?

The truth is that many people fight their tickets in court not because the ticket was wrongly issued, but because they’re hopping mad about the person who issued it. And often enough, a judge may agree with them. Parking tickets serve genuine purposes that the public actually agrees with; keeping the roads clear for traffic when traffic is heaviest, sharing limited spaces among a huge number of vehicles, and allowing deliveries to businesses while keeping traffic flowing are all things reasonable people want. But when the rules are enforced in a picayune and trifling way, when the issuers seem uncaring or hostile, or when a ticket just screams, “injustice,” people run to the courts for relief, and judges will often be sympathetic.

Study Up
Speaking of justice, here’s a good way to avoid having more of your tickets challenged successfully: know the law. It’s astonishing how many officers can’t decipher the signs that they’re issuing violations about. It’s also surprising how many are unaware of which vehicles are allowed to park somewhere because of a permit. Of course, cities could help by providing clearer and more prominent signage (including about permits), but that’s no excuse for a parking professional. Getting the sign wrong on the ticket is probably the quickest way to lose your battle at the courthouse. Is there anything sillier than a car with a permit getting hit with a slew of tickets? (Incidentally, some flexibility on this would help. Must everyone hear the story about the car that was moved and marked “Do Not Ticket” by police because of an emergency later being papered over with violations?)

Don’t even get me started about ticket fraud. Sure, the drivers are the ones who are most likely to play schtick to avoid fines, but some ticket issuers seem to be happily unaware of how serious it is to just issue tickets willy-nilly to meet some goal. Judges have seen officers issue 10 tickets to 10 cars in 10 minutes, in locations that are scattered across five boroughs. They also hear cases of ticket-writers taking out personal vendettas against neighbors. There’s nothing to say here except: don’t.

Pay Attention
On the subject of “don’ts” here’s another one: don’t give wrong advice to drivers. This scenario is actually more common than you might think. It goes like this: hapless driver, with screaming kids in the backseat, is desperate for a parking spot and can’t figure out the signage. He flails down a passing cop and asks if he’s allowed to park “there.” The enforcement officer, too busy or too distracted by the howling of the kids, doesn’t look carefully at all the signs, and says “sure.” Ten minutes later, while the family watches from the window of the fast food joint they scrambled into, another parking enforcement officer issues a citation. Voila—we’re now in court.

Similarly, don’t be afraid to admit a mistake to a driver. If the woman says she paid the meter and the stub fell off the dash and if she finds it after you’ve started writing out the ticket, void the ticket on the spot. It drives everyone crazy when the cause of justice is clear, but policy forces drivers into court.

Finally, remember that when a ticket is fair, the driver usually knows it. Sometimes the best way to avoid court and ensure that a driver just pays is to give him or her a sympathetic smile. A little empathy, perhaps a small joke, a line about how no one can get away with it at this location–all of these things will subtly remind the violator that yes, he really is in the wrong. And in that case, even if your handwriting is awful, you mixed up a stop sign with a handicapped zone, and you forgot to sign the ticket, the driver will probably just glance at the dollar amount and be grateful it isn’t higher.