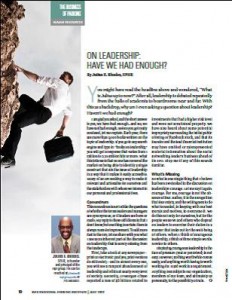 You might have read the headline above and wondered, “What is Julius up to now?” After all, leadership is debated repeatedly from the halls of academia to boardrooms near and far. With this as a backdrop, why am I even asking a question about leadership? Haven’t we had enough?

I am glad you asked, and the short answer is yes, we have had enough…and no, we have not had enough. Before you get really confused, let me explain. Each year, there are more than 2,000 books written on the topic of leadership. If you go to any search engine and type in “books on leadership,” you will get a response that varies from 1 million to 2.26 million hits or more. What this tells me is that no one has cornered the market on being able to identify a single construct that fits the issue of leadership in a way that it makes it easily accessible. Many of us are seeking a way to make it relevant and actionable for ourselves and the stakeholders with whom we interact in our personal and professional lives.

Conundrum
This conundrum is sort of like the questions of whether the terms leaders and managers are synonymous, or if leaders are born or made. My reply to these old idioms is that I don’t know, but one thing is certain: there is always room for improvement. To add more fuel to the fire, let me share with you what I see as an inherent part of the discussion on leadership that is sorely missing from the landscape.

First, take a look at any newspaper—print or electronic (and yes, print versions do still exist)—and in almost every one, you will see a rampant abandonment of leadership and ethics at nearly every level of society. Recently, JPMorgan Chase reported a loss of $3 billion related to investments that had a higher risk level and were not scrutinized properly. We have also heard about some potential impropriety surrounding the initial public offering of Facebook stock, and that its founder and the lead financial institution may have omitted or misrepresented material information about the social networking leader’s business ahead of its IPO. Stop me if any of this sounds familiar.

What’s Missing
So what is one single thing that I believe has been overlooked in the discussion on leadership? Courage. Let me say it again: courage. For me, courage is not the absence of fear. Rather, it is the recognition that fear exists, and the willingness to do what is needed, in keeping with our best morals and motives, to overcome it. We do this not only for ourselves, but for the people we serve and others who depend on leaders to exercise their duties in a manner that looks out for the well-being of others. When I think of courageous leadership, I think of three simple words: Service to others.

Displaying courageous leadership in the face of pressure (real or perceived) is not easy. However, nothing worthwhile comes easily, and anything worth having is worth working for. Hard work is a requirement. Anything less subjects our organization, members of our team, and ultimately us personally, to the possibility of ruin.