We are all familiar with the sight of bagged meter heads. Municipalities and other  segments 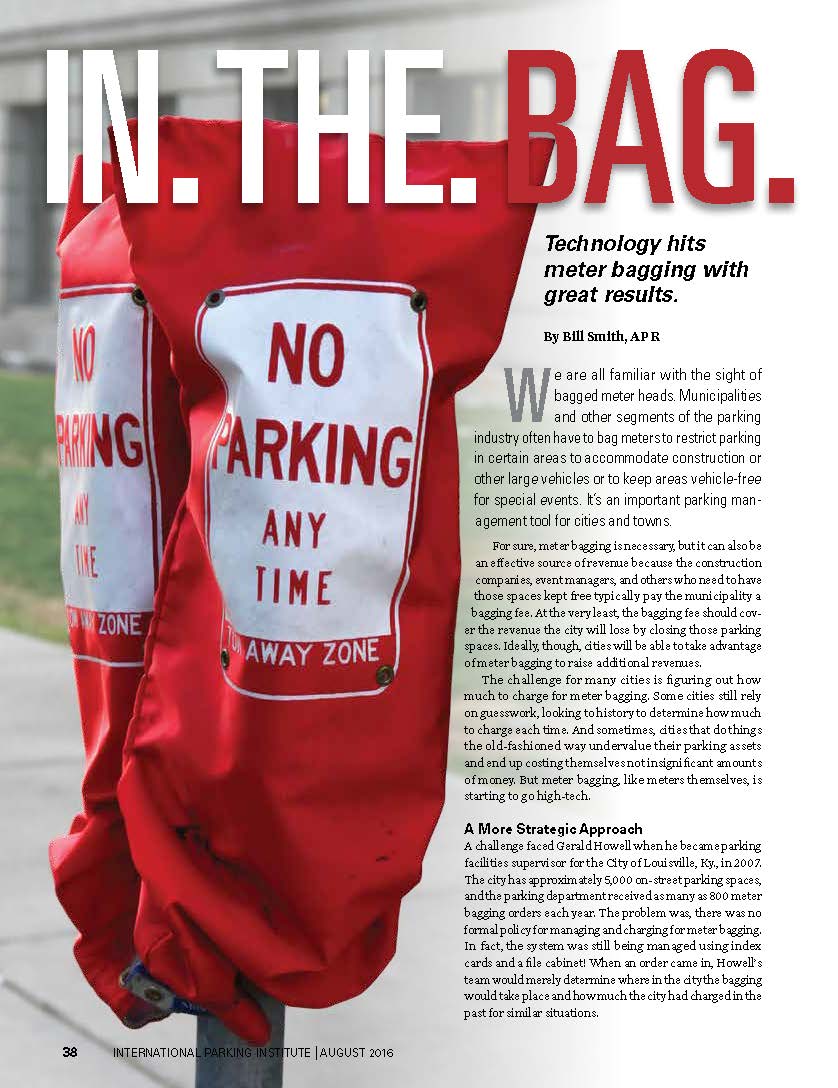 of the parking industry often have to bag meters to restrict parking in certain areas to accommodate construction or other large vehicles or to keep areas vehicle-free for special events. It’s an important parking management tool for cities and towns.

For sure, meter bagging is necessary, but it can also be an effective source of revenue because the construction companies, event managers, and others who need to have those spaces kept free typically pay the municipality a bagging fee. At the very least, the bagging fee should cover the revenue the city will lose by closing those parking spaces. Ideally, though, cities will be able to take advantage of meter bagging to raise additional revenues.

The challenge for many cities is figuring out how much to charge for meter bagging. Some cities still rely on guesswork, looking to history to determine how much to charge each time. And sometimes, cities that do things the old-fashioned way undervalue their parking assets and end up costing themselves not insignificant amounts of money. But meter bagging, like meters themselves, is starting to go high-tech.

A More Strategic Approach
A challenge faced Gerald Howell when he became parking facilities supervisor for the City of Louisville, Ky., in 2007. The city has approximately 5,000 on-street parking spaces, and the parking department received as many as 800 meter bagging orders each year. The problem was, there was no formal policy for managing and charging for meter bagging. In fact, the system was still being managed using index cards and a file cabinet! When an order came in, Howell’s team would merely determine where in the city the bagging would take place and how much the city had charged in the past for similar situations.

Howell realized this approach was likely costing the city money—and it was certainly causing his team unnecessary headaches—so he and his team set out to create a database of on-street spaces where they could record meter bagging orders. The city’s existing software wasn’t up to the task of creating such a large database, however, so Howell began reaching out to colleagues in other cities in search of a software program that could help him manage bagging orders. To his frustration, he found that there was no software available to handle these types of parking management challenges.

Desperate for a solution, Howell turned to Kyle Cashion, a principal with IntegraPark. “I was hoping they would also have a software product that could help us manage meter bagging,” Howell says.

Although the exact product he envisioned didn’t exist, the two entities decided to work together to come up with an easy-to-use electronic solution and make meter bagging less painful for the city and maybe more profitable. The first step was figuring out exactly what the city needed the new program to do. “They needed more than just a spreadsheet to schedule bagging and unbagging,” Cashion says.

“They needed a program that could provide inventory control so they would know what resources they had available at a given time and manage those resources both effectively and profitably.”

The software ultimately developed could keep track of where spaces were available and record when they were reserved for bagging to ensure they weren’t double sold. It also automatically generated invoices and monitored payment to make sure the city was receiving full value for its parking spaces.

Specifics
The software divided Louisville into different districts, including the central business district, the area outside the city’s medical center, and outlying areas. Different locations were valued at different rates, with the CBD earning the highest bagging rate. Additionally, different user groups were also charged varying rates, with nonprofit groups sponsoring fundraising walks, races, and similar events paying less to bag meters than developers and other for-profit users. Finally, the day on which the bagging was to take place influenced the cost, with weekdays earning more than weekends.

“We can now control meter bagging much better, and we have the ability to monitor at any given time what has been bagged, who issued the permit, and how much the city earned,” he says. “We also know what’s going to be bagged in the future.”

His department has also seen vital economic benefits from transitioning to the computer-based system. Prior to the development of the software, the city typically earned $20,000 to $40,000 per year in meter-bagging fees. Since installing the software and using it to implement a strategic meter-bagging program, bagging revenues have risen to $500,000 per year. That money is returned to the city’s economic development department and is used to maintain, operate, and build parking resources.

Beach Days
Other municipalities are also turning to computers to plan and track the established process of meter bagging. The City of West Palm Beach, Fla., receives many meter bagging requests for block parties and other events. West Palm Beach has several staple events, including its two largest, Moonfest and Sunfest, during which 20 blocks are closed off to accommodate 350,000 visitors. The city also hosts an International Boat Show, which attracts more than 100,000 visitors and requires the bagging of more than 400 meters, and a July Fourth celebration that hosts 100,000 people, necessitating the bagging of 200 meters.

“These are very large events,” says Chris Zachritz, parking systems administrator for the City of West Palm Beach. “There’s no room for guesswork because missing bags can end up costing the city a lot of money. One of the most important advantages of using software is the extent to which it provides accountability. It allows us to track who reserves a bag and whether that bag was managed appropriately.”

“The meter bagging software helps to ensure that the bags are going on when they should and coming off when they are supposed to,” Zachritz says. “Our bagging system is much more efficient and accurate, and we are earning more from our meters because those meters aren’t sitting unused because someone forgot to remove a bag. Of course, this is also a major customer-service benefit because it ensures that all of our metered spaces are available to drivers when they should be.”

Since installing the software and using it to implement a strategic meter-bagging program,
bagging revenues have risen to $500,000 per year.

BILL SMITH, APR, is principal of Smith-Phillips Strategic Communications and contributing
editor of The Parking Professional. He can be reached at bsmith@smith-phillips.com or 603.491.4280.