Member News: ParkMobile to Expand Its Services in the City of Redondo Beach to Cover More Locations for Contactless Parking Payments 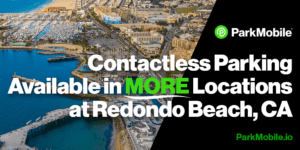 ParkMobile, a premier parking app in the U.S, announced that it will be expanding its services in the City of Redondo Beach, California. This is part of the city’s plan to expand contactless parking payment options throughout the city. ParkMobile is now available at close to 5,000 spaces both on-street and at the waterfront in Redondo Beach.

ParkMobile has over 28 million users across North America and is available for both iPhone and Android devices. ParkMobile can also be accessed on a mobile web browser for those who do not want to download an app. To pay for parking using the mobile or web app, a user enters the zone number posted on signs around the parking spot, selects the amount of time needed, and touches the “Start Parking” button to begin the session. The user can also extend the time of the parking session on their mobile device.

ParkMobile has more than 2.5 million users in California. The app has extended its services to cover multiple major cities in the state, including San Francisco, Monterey, Los Angeles, Berkeley, Sacramento, Newport Beach, Oakland, San Jose, and more. Also, the app can be used to pay for parking services at many universities and colleges in California, including San Jose State, the University of San Diego, UCLA, Cal Poly, and Stanford.

“We are excited to offer more contactless payment options for parking with ParkMobile,” said Lt. Shawn Freeman, Redondo Beach Police Department. “We know a lot of people in the city are looking forward to having this capability on their phone, and we are happy to be able to offer the ParkMobile service to our residents and visitors.”

“ParkMobile is proud to partner with the City of Redondo Beach to help them enable contactless parking at more parking locations in the city,” says Jeff Perkins, CEO of ParkMobile “We continue to see strong growth in California, as we provide drivers with a safe and easy way to pay for parking without touching the meter.”

ParkMobile, LLC is the leading provider of smart parking and mobility solutions in North America, using a contactless approach to help millions of people easily find, reserve, and pay for parking on their mobile devices. The company’s technology is used in thousands of locations across the country, including 8 of the top 10 cities as well as college campuses, airports, and stadiums. People can use ParkMobile solutions to quickly pay for on-street and off-street parking without having to use a meter or kiosk. Additionally, ParkMobile offers parking reservations at stadium venues for concerts and sporting events. Reservations are also available in metro area garages, allowing people to drive into the city without having to worry about finding parking. ParkMobile has been named to the Inc. 5000, Deloitte Fast 500, Smart Cities Connect “Smart 50,” and the Atlanta Journal Constitution’s Top Workplaces.