LOGIN
Search
Home / IPMI Blog / The Mighty B17 and its Secret for Success: The Checklist

The Mighty B17 and its Secret for Success: The Checklist 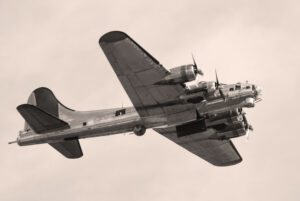 No one had seen anything like it. The B17 was immediately the new king of its class for large, propeller-driven aircraft. At its unveiling, a reporter dubbed it the “flying fortress” because of the numerous machine guns protruding in all directions from its fuselage. Boeing quickly adopted and trademarked the name and today, the B17 is widely recognized by its iconic shape and renowned for its decisive role in WWII.

This legendary aircraft didn’t have a great beginning. It would actually lose a competitive contract to arguably one of the most forgettable bombers of the era: the Douglas B-18 Bolo.  The B-17 had been outperforming the Bolo in every way and then, the prototype crashed.  The prototype was destroyed and the three crew were killed.

In came to light in the investigation that before takeoff, the (very experienced) test pilot had neglected to disengage the devices that locked the aircraft’s control surfaces while it was on the ground. With the locks in place, the pilot would have been unable to control the aircraft once in flight. Boeing’s solution for the future: a checklist. They determined that the aircraft had become too complex to attempt to manage without one. In this day and age, it’s hard to imagine a world without–let alone a flight without–a checklist.

I love checklists and had no idea of their origin until recently. I believe they help put people and organizations in the best possible situations for success. I see them everywhere–at a vacation theme park with the family, I watched teenagers methodically position themselves and walk through their checklist (with another great safety practice–pointing and calling) right before they launched people, including me, on a high-speed ride.

If you have a complicated or zero-fail task ahead of you, take the time to build a checklist. It is not a reflection of you or your team’s talent; it’s simply about making sure you don’t miss the small stuff.

As the world moves back to into a more active landscape, more pedestrians, buses, bicycles, automobiles, and the numerous forms of alternative transportation are going to be interacting again. It’s possible we might have fallen into some bad procedural habits during COVID. Dust off or update your checklist and put it back in play

Remember, even one of the most iconic aircraft in history would have never reached its legendary status without a checklist.

Matt Penney, CAPP, is director of parking and transportation services at Baylor University and an IPMI industry trainer.