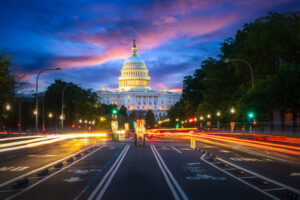 In recent years, Washington, D.C., has seen exponential growth, with more people than ever living, working, and visiting in the city. With that has come an increased demand for transportation and safety, especially for the most vulnerable commuters: those who use micro-mobility vehicles.

To properly adapt to the evolution of mobility and ensure the safety of its citizens, the city embarked on an ambitious project—joining Vision Zero, a program aimed at eliminating serious injuries and fatalities on its roadways—and received the 2021 Award of Excellence for Innovation in a Mobility, Transportation, or Parking Program in the process.

In essence, D.C. Mayor Muriel Bowser and the Department of Transportation took a three-pronged approach to ensure the initiative’s success.

Through engineering, planners looked at how roadways were currently being used—where bike lanes existed, whether they were protected, where and to what extent they connected, and what construction was being done.

From there, they put together a plan to create new pathways, upgrade those already established, and connect them to best form routes that would allow commuters safe access to all parts of the city.

To ensure bike lane related rules were ultimately followed, the city was also able to garner the support of the Department of Public Works Parking Enforcement Management Administration (PEMA) to enforce non-parking compliance in bike lanes. PEMA turned to parking enforcement experts to implement camera technology and a ticket-by-mail system to effectively patrol the new lanes, discourage unsafe practices, and create a more efficient and reliable system for catching and ticketing scofflaw offenders.

In addition, to help change perception and driver behavior, project leaders even teamed up with the Metropolitan Police Department to help educate the public on reckless and dangerous driving, as well as how and where to use bikes, scooters, and other newer micro-mobility vehicles.

In the end, the award-winning effort helped to create a framework for establishing similar initiatives nationwide and set a new standard for safety on the capital’s roadways.

Tim Taylor is marketing manager at gtechna, a division of Harris Computer.