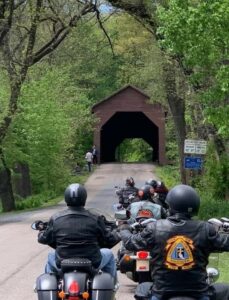 We’ve been hearing for months that we are in tough/crazy/unprecedented times. We’re still being encouraged to stay home and limit our contact with others. It can be isolating and for some, it can be utterly depressing.

Some people have found solace in enjoying old and new hobbies. Reading, cooking, crafting, and DIY projects are just a few that come to mind. Me? I have been bitten by the motorcycling bug. For a little more than a year, I have been going on motorcycle rides, sometimes with just the one bike and sometimes as part of larger group rides.

I ride with a group of men and women, most of whom are veterans including a highly decorated former Navy SEAL. There is a young newcomer from the Army who suffers PTSD. There is another fella who is a recent widower, his wife having died tragically in 2019. They refer to their time on two wheels as “wind therapy.” I am not sure who officially coined the term, but it’s a real thing.

It is difficult to articulate the joyful feeling of a ride through the countryside (in my case, in Virginia) on a motorcycle. Instead of watching nature go by through a car window, you feel like you are in nature. In fact, a lot of avid motorcycle enthusiasts refer to cars as cages! It is also difficult to adequately describe the feeling of friendship that comes with being part of a group motorcycle ride. Please understand, I am NOT describing a Sons of Anarchy-style motorcycle club. Far from the stereotype, the crew I ride with describes themselves as an “ice cream social club with a motorcycle problem!” Many of the rides culminate in a stop at an ice cream stand.

I would urge you to hang in there and participate in whatever kind of therapy helps you through this pandemic and/or stress in general. I look forward to the warming weather and my next ride. As one meme so aptly put it, “You’re only one ride away from a good mood.”