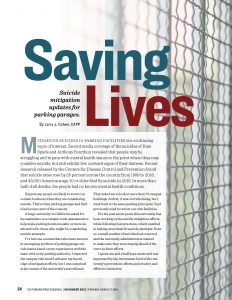 MITIGATING SUICIDES IN PARKING FACILITIES is a continuing topic of interest. Recent media coverage of the suicides of Kate Spade and Anthony Bourdain revealed that people may be struggling and in pain with mental health issues to the point where they may consider suicide, but still exhibit few outward signs of their distress. Recent research released by the Centers for Disease Control and Prevention found that suicide rates rose by 25 percent across the country from 1999 to 2016, and 45,000 Americans age 10 or older died by suicide in 2016. In more than half of all deaths, the people had no known mental health conditions.
Experts say people are likely to scout con­venient locations when they are considering suicide. That’s when parking garages and facil­ities become part of the concern.
A large university in California asked for my assistance in a campus-wide assessment to help make parking locations safer or more un­attractive for those who might be considering suicide attempts.
I’ve become a somewhat reluctant resource in an ongoing problem of parking garage sui­cide issues based on my experiences with the issue with a city parking authority. I expected the campus visit would enhance my knowl­edge of mitigation efforts, but I was surprised at the extent of the university’s surveillance. They asked me to look at more than 70 campus buildings. At first, it was overwhelming, but I went back to the same guiding principles I had previously used to review our own facilities.
For the past seven years, this university has been working on its suicide mitigation efforts while following best practices, which resulted in halting more than 20 suicide attempts. Even so, a small number of suicides had occurred, and the university administrators wanted to make sure they were staying ahead of the curve in their efforts.  I spent one and a half days onsite and was impressed by the investment level of the uni­versity’s prevention efforts and creative and effective initiatives.
We all learn from each other in this area. Here’s a 10-step list to help your organization mitigate garage suicides and stay up-to-date with best practices:

LARRY J. COHEN, CAPP, is executive director of the Lancaster (Pa.) Parking Authority. He can be reached at lcohen@lancasterparkingauthority.com.