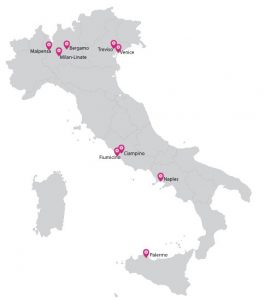 Owned and operated by Italian airport management company, SAVE Group, both international airports serve the north-eastern city of Venice – a global gateway for travellers flying to and from the popular tourist destination.

Drivers parking up at Italy’s fourth busiest airport, Venice Marco Polo Airport, will now be able to reserve their parking at six of the airport’s on-site car parks through www.parkcloud.com.

Just a short distance from the terminal, P1 comprises 2,000 covered parking spaces, which are monitored 24/7 and secured by barrier entry. Convenient and secure open-air parking is also available for long-stay customers across P2, P4, P7 and Speedy Park. The airport’s P6 car park will also be available for passengers to pre-book exclusively through ParkCloud’s network.

ParkCloud has also activated five on-site car parks for neighbouring Treviso Airport – a popular hub for low cost carriers. Passengers will be able to choose from secured, open-air and undercover options at car parks Park B1, B2, C, D and E – all conveniently situated within walking distance of the terminal.

Travellers flying from Treviso with Wizz Air or Ryanair will also be able to reserve parking via ParkCloud’s brand partnerships, allowing the airport to offer reservations for every aspect of customers’ journeys.

“For ParkCloud, creating strategic partnerships with key international airports is essential for providing the most relevant and convenient parking options and we’re eager to continue our impressive record of growth within the sector.”

As the ‘go to’ market leader in its field, ParkCloud’s Italian portfolio of official airport car parks extends beyond the top five, with partnerships established with eight of the country’s top ten leading airports.