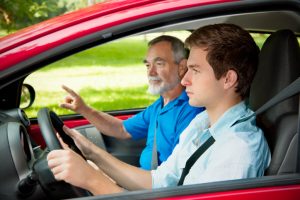 I’m writing this in a Starbucks, not because it’s summertime and the living is easy, but because the parking lot is where my son and I rendezvoused with a very brave ex-police officer for the teenager’s second, two-hour driving lesson.

My memory of the first time I took the keys and drove off by myself is of pure joy. Real freedom in my non-transit-friendly hometown, the ability to come and go as I pleased, and the feeling of being in control of the 84 horses under the hood of my very safe, very sensible Plymouth Reliant K (oh hush) were about the best thing I could imagine. Driving on an open road remains among my favorite things to do, which is why I haven’t entirely embraced the idea of autonomous vehicles. I like driving myself.

On the third week of his learner’s permit, my son drove me to today’s lesson. We were about a half-mile from the house when he muttered, “I hate this,” and I noticed the death-grip he had on the steering wheel. The idea of having a car drive him instead of the other way around is super appealing to him and he’s already asking me why he has to learn to back-in park when he’ll never have to do it. “Dude, relax,” I said. “This is actually fun.” Eye roll. What does Mom know?

For the moment, he’s out there driving. He’s nervous, I’m nervous, my bet is his instructor is most nervous of all. But it also has me realizing that my perspective—that driving is fun—isn’t shared by everyone. Which makes me wonder how it’ll all balance out when the technology is good enough to take over and a good number of people want it to, but not everyone’s in love with the idea.

P.S.: Unrelated to the above, a minute ago, a state trooper walked in and got in line. Two people, one in line and one who jumped out of her seat as soon as she saw him, insisted on paying for his order and thanked him for his service. Which is another great reminder: There are a lot of good people in this world. Have a great weekend.