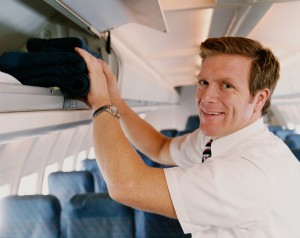 Last week, I boarded a regional flight headed to Houston. If you’ve ever been on a small regional jet, you’re able to envision the cramped passenger seating arrangements. I buckled into my first-row seat and settled in to read my emails. The solo flight attendant was busy with his pre-flight duties and after a little while, I heard a young woman outside the plane complaining loudly to him about her carry-on luggage.

“I’m sorry, Ma’am, but FAA regulations require that before you board, you’ll need to try and combine two of your three bags. If that’s not possible, we can gate check one of the bags through to your final destination,” explained the attendant. After another round of loud, aggressive complaints, the passenger picked up her belongings, pushed her way past the attendant, and proceeded to her seat, ignoring all directions. I watched for the attendant’s reaction to her actions. He took a long, deep breath in and then slowly let it out. He confirmed with the flight crew that they heard the verbal exchange and both pilots agreed the situation needed to be addressed before the plane door could be closed.

A call was made and after a few short minutes, another airline representative arrived to intervene. She spoke with the crew and proceeded down the aisle, returning about five minutes later with the woman and all of her belongings; the irate passenger was escorted back to the terminal. The doors were secured, a few passengers applauded, and our flight was back on track.

Once airborne, I asked the flight attendant how he was doing. He said, “Pretty well. It’s just a little unsettling when that sort of things happens.” As we talked, I told him about my work presenting conflict resolution courses and told him he’d done a great job remaining calm.

“Did you notice my combat breathing? It’s one of the techniques I’ve been studying,” he said. He shared that it helps to counteract some of the effects of the extra adrenaline running through his system when a stressful situation happens. What could have been a show of force from the flight attendant was instead a calm, metered, and appropriate approach to the situation.

Parking professionals do ourselves and our profession a disservice when we respond in kind to anger and aggression. It doesn’t look good, sound good, or feel good to anyone. Learning techniques that help us to remain calm and to keep our emotions in check during confrontational situations is critical for our professional success.