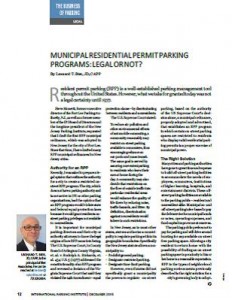 Resident permit parking (RPP) is a well-established parking management tool throughout the United States. However, what we take for granted today was not a legal certainty until 1977.

Steve Monetti, former executive director of the Fort Lee Parking Authority, N.J., as well as a former member of the IPI Board of Directors and the longtime president of the New Jersey Parking Institute, requested that I draft the first RPP municipal ordinance, which was adopted in New Jersey for the city of Fort Lee. Since that time, I have drafted many RPP municipal ordinances for New Jersey cities.

Authority for an RPP
Recently, I was asked to prepare a legal opinion that outlines the authority for a city to create a restricted on-street RPP program. The city, which does not have a parking authority and is not active in IPI or other parking organizations, had the opinion that an RPP program would violate state and federal equal protection laws because it would grant residents on-street parking privileges not available to nonresidents.

It is important for municipal parking directors and their city or authority attorneys to know the legal origins of how RPP came into being. The U.S. Supreme Court, in County Board of Arlington County Virginia, et. al. v. Rudolph A. Richards, et. al. 434 U.S. 5 (1977) addressed the constitutionality of an RPP program and reversed a decision of the Virginia Supreme Court that said they violated the 14th Amendment—equal protection clause—by discriminating between residents and nonresidents.

The U.S. Supreme Court stated:
To reduce air pollution and other environmental effects of automobile commuting, a community reasonably may restrict on-street parking available to commuters, thus encouraging reliance on car pools and mass transit. The same goal is served by assuring convenient parking to residents who leave their cars at home during the day. A community may also decide that restrictions on the flow of outside traffic into particular residential areas would enhance the quality of life there by reducing noise, traffic hazards, and litter. By definition, discrimination against nonresidents would inhere in such restrictions.

However, even if states did not specifically grant a municipality the powers to regulate on-street parking, based on the authority of the US Supreme Court’s decision alone, a municipal ordinance, properly adopted and advertised, that establishes an RPP program in which certain on-street parking spaces are restricted to residents who display valid residential parking permits is a proper exercise of municipal power.

The parking public prefers not to pay for parking and will drive around hunting for any available on-street free parking space. Allowing a city resident to return home with the possibility of finding an on-street parking space in proximity to his or her home is a reasonable expectation. RPP in the types of neighborhood parking environments previously described is the right solution for a city’s governing body to adopt.