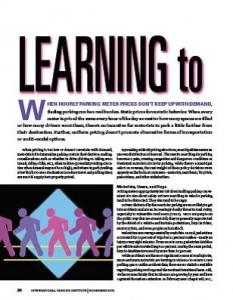 When hourly parking meter prices don’t keep up with demand, finding parking can be a real burden. Static prices force static behavior. When every meter is priced the same every hour of the day no matter how many spaces are filled or how many drivers want them, there’s no incentive for motorists to park a little further from their destination. Further, uniform pricing doesn’t promote alternative forms of transportation or multi-modal options.

When pricing is too low or doesn’t correlate with demand, motorists fail to internalize parking costs in their decision-making. Considerations such as whether to drive (driving vs. taking mass transit, riding a bike, etc.), when to drive (potentially visiting a location when demand may not be as high), and where to park (walking a few blocks to one’s destination to reduce travel and parking time) are moot if supply isn’t properly priced.

By creating artificial pricing structures, municipalities ensure an uneven distribution of demand. The result? Searching for parking becomes a pain, creating congestion and dangerous conditions as frustrated motorists circle for parking. While there’s a municipal effect on revenue, the real weight of these policy decisions rests squarely on the backs of customers—motorists, merchants, bicyclists, pedestrians, and other stakeholders.

Motorists, Users, and Rage
Pricing meters appropriately isn’t all about making parking convenient. It’s also about safety. Drivers searching in vain for parking tend to be distracted. They also tend to be angry.

Drivers distracted by the search for parking are more likely to get into accidents and are an increasingly deadly threat to road safety, especially to vulnerable road users (VRUs). VRUs are people on the public way that are at most risk; they’re generally unprotected by the shield of a vehicle and include pedestrians, bicycle riders, motorcyclists, and even people on horseback.

Pedestrians are overrepresented by crash data. In 2013, pedestrians accounted for 11 percent of trips but 14 percent crashes—nearly an injury every eight minutes. From 2005 to 2010, pedestrian fatalities per vehicle mile traveled leapt 46 percent. During the same period, bicycle fatalities increased by more than 30 percent.

While accidents are the most significant source of road injuries, more and more motorists are turning to violence to secure a rare parking space. Unlike accident data, there are no statistics available regarding parking road rage and the resultant intentional harm. Still, we know anecdotally that incidences are growing by year and have captured the nation’s attention. In February near Chapel Hill, N.C., three students were allegedly murdered over a parking dispute. And recently in Waco, Texas, a reported argument over a parking space led to a shootout between motorcycle gangs that caused nine deaths, 18 injuries, and the arrest of 170 bikers.

Managing Demand
Because I’m a Chicago native, I’ll use playoff hockey as a metaphor for parking demand. Imagine if tickets to the Stanley Cup finals all cost the same amount and allowed for general seating. Fans would assuredly crowd near the glass looking for seats. No one would sit in the nosebleeds. Uniform event pricing begs for an imbalance of demand.

Hourly metered parking rates are no different. Properly priced, we can fill every seat in the arena. By infusing technology with demand-based pricing models, we can change driver behavior. Optimally, differentiated pricing will lead to more available spaces during peak occupancy, reduce congestion and pollution stemming from people looking for parking, shorten travel times, and encourage the use of alternate forms of transportation.

Whether you call it value pricing, performance pricing, dynamic pricing, or variable pricing, managing demand using meter prices cannot be accomplished through a finger-in-the-air approach. It’s a complex process and one that, without expertise—including data scientists, advanced algorithms, and machine learning—is tough to get right.

Noted economists say that 15 percent of the spaces on a block should always be available to ensure there’s adequate turnover and to encourage parkers. That goal—85 percent occupancy—does not necessarily tell a complete story. While 85 percent could represent an even distribution of demand over the course of an hour or day, it likely does not. Using average demand to guide pricing decisions fails to recognize nuanced, yet critical, parking trends.

Let’s examine a block where demand during the first 40 minutes of an hour is 77.5 percent but increases to 100 percent during the last 20 minutes of that hour. The average occupancy rate would be 85 percent. That’s optimal, so rates shouldn’t be increased on this block, right? Well, not necessarily.

Even though the block is only full one-third of the time, a disproportionate number of customers are parked during that peak period (40 percent). Now, if half as many motorists are cruising as are parked, then 50 percent of the customers are affected. Suddenly, the traditional model for establishing price doesn’t work so well.

Segmentation
Rates can be partitioned across the hours of a day to optimize demand. The key, however, is to reduce the likelihood of pricing errors while still keeping it simple. Rates need to be easy to both understand and communicate to customers if parking managers want them to incorporate pricing in their decision-making. Changing rates willy-nilly without alerting the public won’t change behavior.

When motorists don’t know what to expect in terms of rates, they become hostages instead of customers. When they arrive at a meter, they will pay whatever’s required to park because it’s too late to turn around and go home. It’s classic Stockholm syndrome. Customers might think policy-makers are looking out for them when in fact, the pricing policies are, at best, indifferent to them. Economists have another term for this: price-gouging.

Typically, policy-makers shouldn’t implement more than three or four partitions per day, and whenever possible, should begin and end the partitions on the hour to avoid confusion. It’s much easier for customers to plan their trips accordingly when they know rates will increase at noon as opposed to, say, 12:13 p.m. Generalizing the partitions across a number of days is recommended whenever possible to simplify messaging.

As part of the LA Express Park project, for example, the following segments were implemented Monday through Friday to strike a good balance between clarity and accuracy:

Increments
The amount of a rate increase or decrease must be sizable enough to affect behavior. Smaller changes are generally inelastic and are less likely to affect demand. Larger changes get noticed.

In Los Angeles, rates were reduced at 60 percent of the meters by an average of 11 percent. Rates were only increased at 27 percent of the meters. The rate changes were all increases or reductions of 50 cents or more. The new rates led to a reduction of parking congestion of 10 percent at the highest utilized meters and a 5 percent improvement in use of the underutilized meters. In addition to improving convenience, the adjustments improved revenue by 2 percent as well. Rate changes of just 25 cents have not been as effective in the market at changing demand.

Thresholds
Price adjustments are generally limited to bands established by ordinance. The bands, however, must provide enough flexibility to change behavior. For instance, laws that prohibit adjustments beyond a percentage of the original hourly rate create an artificial cap. They are less successful because they assume the original rate structures properly addressed demand. That, in fact, is rarely the case.

Time Limits
To really shift demand, parking managers need to use all the tools in their parking toolbox. One tool that doesn’t get used nearly enough is maximum meter stays or time limits. That’s a shame, because time limits are as necessary and effective as a basic hammer or screwdriver.

In most cities, time limits are fairly arbitrary. They don’t really recognize demand or the types of businesses being served by meters on a block. The limits rarely correlate with overarching goals. But by increasing time limits in areas where utilization is especially low (as in Indianapolis and the LA Express Park project area), parking managers can shift meter use away from the high-occupancy areas. In Indianapolis, for instance, the city was able to improve utilization by 20 percent at underused meters simply by extending time limits. The City of Cincinnati recently embarked on a similar course.

Putting It in Park
Creating more availability through demand-based parking only makes sense. When customers get parked quicker, there’s less congestion, fewer distractions, a reduced likelihood of injury or harm to pedestrians and bicyclists, and fewer altercations. But it must be done right, as in L.A. and in D.C., utilizing the skills of data scientists and machine learning to evaluate the parking system and make recommendations about pricing, including segments, increments, frequency, and maximum stays.

Matt Darst is vice president, parking and mobility solutions, at Xerox. He can be reached at matthew.darst@xerox.com.