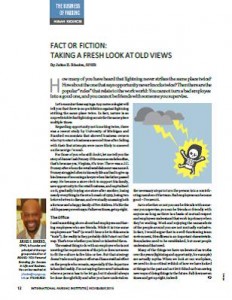 How many of you have heard that lightning never strikes the same place twice? How about the one that says opportunity never knocks twice? Then there are the popular “rules” that relate to the work world: You cannot turn a bad employee into a good one, and you cannot be friends with someone you supervise.

Let’s examine these sayings. Any meteorologist will tell you that there is no prohibition against lightning striking the same place twice. In fact, nature is so unpredictable that lightning can strike the same place multiple times.

Regarding opportunity not knocking twice, there was a recent study by University of Michigan and Stanford economists that showed business owners who try to start a business a second time after failing with their first attempts were more likely to succeed on the next go-’round.

For those of you who still doubt, let me tell you the story of James Cash Penney. If the name sounds familiar, that’s because yes, Virginia, it’s true: There was a J.C. Penney after whom the retail establishment was named. Penney struggled often in his early life and had to give up his dreams of becoming a lawyer when his father passed away. He became a store clerk to support his family, saw opportunity in the retail business, and capitalized on it, gradually buying one store after another, losing nearly everything in the stock crash of 1929, losing two beloved wives to disease, and eventually amassing both a fortune and a happy family of five chidren. It’s like the old Japanese proverb says: Fall seven times, get up eight.

The Office
I said something above about bad employees and having employees who are friends. While it is true some employees are “bad” (a word I hear a lot in this area is “toxic”), the reality is they probably didn’t start out that way. That’s true whether you hired or inherited them.

The easiest thing to do with an employee who is not meeting the requirements of the job or does not seem to fit the culture is fire him or her. But that strategy doesn’t take much guts or effort and has a residual effect on the people who remain, especially if the departure is handled rashly. I’m not saying there aren’t situations where a person has to be let go, but it should always be done thoughtfully and after you have undertaken the necessary steps to turn the person into a contributing member of the team. Bad employees can become good—I’ve seen it.

As to whether or not you can be friends with someone you supervise, you can be friends or friendly with anyone as long as there is a basis of mutual respect and employees understand that work is primary when they’re working. Work and enjoying the camaraderie of the people around you are not mutually exclusive. In fact, I would argue that in a well-functioning team environment, friendliness is an important characteristic. Boundaries need to be established, but most people understand that need.

Many of the things we have understood as truths over the years (lightning and opportunity, for example) are actually myths. When we look at our workplace, we need to do a critical rethink of how we have looked at things in the past and not let it blind us from seeing new ways of doing things in the future. Fall down seven times and get up eight, indeed!

Julius E. Rhodes, SPHR, is founder and principal of the mpr group and author of BRAND: YOU Personal Branding for Success in Life and Business. He can be reached at jrhodes@mprgroup.info or 773.548.8037.