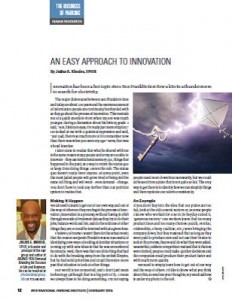 Innovation has been a hot topic since Ben Franklin first flew a kite in a thunderstorm to search for electricity.
The major differences between Ben Franklin’s time and today are about 200 years and the enormous amount of information people are continually bombarded with as they go about the process of innovation. This reminds me of a quick anecdote from when my son was much younger, during a discussion about his history grade. I said, “Son, history is easy; it’s really just memorization.” He looked at me with a quizzical expression and said, “But Dad, there’s so much more of it to remember now than there was when you were my age.” Wow, that was a head-knocker.

I later came to realize that what he shared with me is the same reason many people and firms are unable to innovate—they use institutional memory (i.e., things that happened in the past) as a way to retain the status quo or keep from doing things. Here’s the rub: The status quo doesn’t really favor anyone. At some point, even the most jaded people will grow tired of being fed the same old thing and will want—even demand—change. You don’t have to look any further than our political system to realize that.

Making It Happen
We all need to learn to get out of our own way and out of the way of others so they can begin the process of innovation (innovation is a process) without having to shift through mounds of irrelevant data as they try to do their jobs, balance work and life, and do the millions of other things they are or could be involved with at a
given time.

I believe (of course I wasn’t there for the actual event) that the reason Benjamin Franklin was so successful at identifying new ways of looking at familiar situations or coming up with new ideas is that he was encumbered by minutia. Well, there was that one little thing that had to do with the breaking away from the British Empire, but he had solid priorities and could therefore move past that situation to look at other things.

Our world is too connected, and I don’t just mean technology (although that is a big part of it). I mean we always have to be doing something. I’m not saying people need more downtime necessarily, but we could all benefit from a plate that is not quite as full. The only way to get there is to identify how we can simplify things and then replicate our efforts consistently.

An Example
If you don’t buy into the idea that our plates are too full, look at the old General Motors or, as some people I know who worked for GM in its heyday called it, “generous motors.” GM workers knew that too many product lines and too many choices (Buick, Pontiac, Oldsmobile, Chevy, Cadillac, etc.) were bringing the company down, but they reasoned that as long as they were paid to produce cars and not use their brains to look at the process, they would do what they were asked. Meanwhile, offshore competition realized that if choices were limited, people could make quicker decisions and the companies could produce their product faster and with much more quality.

We need to simply learn how to get out of our way and the way of others. I’d like to know what you think about this, so send me your thoughts; my email address is under my photo to the left.

Julius E. Rhodes, SPHR, is founder and principal of the mpr group and author of BRAND: YOU Personal Branding for Success in Life and Business. He can be reached at jrhodes@mprgroup.info or 773.548.8037.