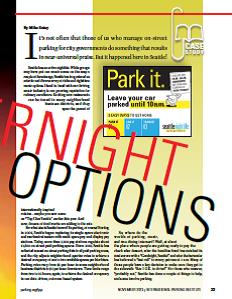 It’s not often that those of us who manage on-street
parking for city governments do something that results in near-universal praise. But it happened here in Seattle!

Seattle has an active nightlife. While grunge may have put our music scene on the map a couple of decades ago, Seattle has long offered an eclectic and diverse array of clubs and nighttime music options. Hand-in-hand with our thriving music industry is our growing reputation for culinary excellence. Exciting new restaurants can be found in many neighborhood business districts, and they span the gamut of internationally-inspired cuisine—maybe you saw some on “Top Chef Seattle” earlier this year. And now, dozens of food trucks are adding to the mix.

For what else is Seattle known? Its parking, of course! Starting in 2004, Seattle began replacing its single-space electronic and mechanical meters with multi-space pay-and-display pay stations. Today, more than 2,100 pay stations regulate about 12,500 on-street paid parking spaces. Since 2010, Seattle has collected annual on-street parking data in all paid parking areas, and the city adjusts neighborhood-specific rates to achieve a desired occupancy of one to two available spaces per blockface. Parking rates vary from $1 per hour in some neighborhood business districts to $4 per hour downtown. Time limits range from two to 10 hours, again, to achieve the desired occupancy in our data-driven, outcome-based system.

So, where do the worlds of parking, music, and fine dining intersect? Well, at about the place where people are getting ready to pay the check after dessert, after the headline band has finished its final encore with a “Goodnight, Seattle!” and after the bartender has bellowed a “last call” to weary patrons at 2 a.m. Many of those people have a key decision to make once they get to the sidewalk: “Am I O.K. to drive?” For those who answer, “probably not,” Seattle has done a couple of things to help, and some involve parking.

Overnight Parking Options
In 2011, the Seattle Department of Transportation (SDOT) re-programmed all of its 2,100 pay stations to allow for evening pre-purchase of the next day’s parking. Here’s how it works:

Paid city on-street parking ends at 6 p.m. in some areas and at 8 p.m. in others. From 10 p.m. until paid parking officially begins the next morning at 8 a.m., our pay stations are programmed to allow customers to pre-pay for the next morning’s parking. Seattle’s pay stations are pay-and-display and dispense a sticky-backed receipt, so parkers can place the receipts for pre-paid parking on the inside of their vehicle windows facing out. The pre-payment receipts have been colloquially dubbed “liquor stickers.”

This option provides a safe alternative for those who may have had too many drinks to drive, without having to worry about their car being towed at 8 a.m. the next day. Drivers can choose a safe alternative such as a cab and give themselves a little extra time the next morning to safely retrieve their cars.

Safety First
In comparison with the almost 1 million total monthly transactions made at Seattle’s pay stations, the pre-payment figures are relatively small. But how many of those 3,000 per month might have otherwise made a bad choice, and at what potential cost to themselves or others?

“When it comes to our road safety efforts, we are taking an ‘all of the above’ approach,” said Seattle Mayor Mike McGinn at an update on the program earlier this year. “That’s why we are making it easier to park your car on our streets overnight to reduce the likelihood of impaired driving.”

Are all pre-paid transactions made by people choosing not to drink and drive? Probably not. For some, pre-payment offers a potential convenience that may have nothing at all to do with a pub crawl or late-night show. But by making this option available, we’ve removed a barrier and enhanced the flexibility of our system to better serve our customers.

Reaction
How has this been received? Outside of a few giggly jokes about the liquor sticker, the initiative has garnered near-universal praise. Seattle media headlines have been unusually positive: “No More Parking Hangovers.” And while most of us usually avoid the comments section of media articles like the plague, especially where parking is concerned, in this case it is hard to find a negative word: “Wow. This is a pretty awesome idea.” “A fresh idea, approved by many people, actually implemented by a department. Hope to see more of this.” “Fantastic, way overdue idea.”

In late 2011, SDOT unveiled five new late-night taxi stands as part of the Nightlife Initiative. The stands provide a safe and visible sidewalk location for people to grab taxis in several of the city’s entertainment hubs. They operate nightly from 10 p.m. to 6 a.m.

And while transit runs far less frequently in the wee hours of “last call,” Seattle has communicated where and when that transit service is available, in support of the mayor’s “all of the above” approach to giving people options to getting behind the wheel.

Getting the Word Out
Rolling these initiatives together, the city has branded its approach to provide an element of fun and visual consistency to its message. “Three easy ways to get home—park it, cab it, transit.” In the case of the late-night taxi zones, branded icons and signs supplement traditional regulatory signs on the street. Similar branding can be found on pay station graphics to inform people of the pre-payment option.

Seattle has also worked with the local music and nightlife community to publicize and communicate the options to safely get home, including advertising on coasters in bars. Later this year, the city will take a page from Austin and Nashville to locate several musician loading zones adjacent to some of the city’s more popular music clubs, to ensure musicians can reliably load and unload their equipment as close to these venues as possible. The zones will be in effect from 4 p.m. to 4 a.m., which will allow them to continue to serve the general public outside those hours. A standard 30-minute loading zone regulatory sign will be accompanied by a branded “Priority for Musicians” sign underneath.

Also, Seattle is in the process of deploying pay-by-phone. By the end of October, wherever there is on-street paid parking, people will have the option to pay with their cellular devices. Seattle is working with its vendor, Pay By Phone, to ensure that the parking pre-payment option is also available for those who choose to use this service.

Our city will continue to look for common-sense solutions and innovative ways to give people safe options to enjoy all the city’s nightlife has to offer. As summarized by SDOT Director Peter Hahn, “This is a common-sense effort using our existing parking meter technology to help discourage impaired driving and give people more options. We’re pleased that it has proven so popular.”

Mike Estey is manager of parking operations and traffic permits with the Seattle Department of Transportation. He can be reached at mike.estey@seattle.gov or 206.684.8132.