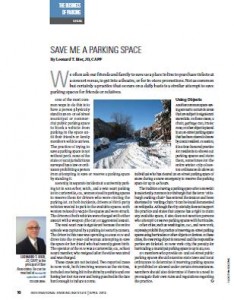 We often ask our friends and family to save us a place in line to purchase tickets at a concert venue, to get into a theatre, or for in-store promotions. Not as common but certainly a practice that occurs on a daily basis is a similar attempt to save parking spaces for friends or relatives.

One of the most common ways to do this is to have a person physically stand in an on- or off-street municipal or commercial public parking space to block a vehicle from parking in the space until their friend’s or family member’s vehicle arrives. The practice of trying to save a parking space is not without peril. None of the state or local jurisdictions surveyed has a law or ordinance prohibiting a person from attempting to save or reserve a parking space by standing it.

Recently, in separate incidents at a university parking lot in Ann Arbor, Mich., and a Wal-Mart parking lot in Cartersville, Ga., women stood in parking spaces to reserve them for drivers who were circling the parking lot. In both incidents, drivers of third-party vehicles wanted to park in the available spaces. Both women refused to vacate the spaces and were struck. The drivers of both vehicles were charged with either assault with a weapon (the car) or aggravated assault.

The Wal-Mart case is significant because the entire episode was captured by a parking lot security camera. The driver in this case was operating a Lexus SUV and drove into the 17-year-old woman attempting to save the space for her friend who had recently given birth. The operator of the SUV was a Cartersville, Ga., School Board member, who resigned after the video was aired and was charged.
These cases are not isolated. Two reported cases in New York, both involving women as the victims, included one being hit in the shins by a vehicle and one having her foot run over and being punched in the face hard enough to induce a coma.

Using Objects
Another common space-saving scenario occurs in areas that are subject to significant snowfalls. In these cases, a chair, garbage can, traffic cone, or other object is placed in an on-street parking space that has been cleared of snow by a local resident. In Boston, it is a time-honored practice for residents to shovel out parking spaces and claim them, sometimes for the entire winter. City of Boston ordinances do allow an individual who has cleared an on-street parking space of snow during a snow emergency to reserve the parking space for up to 48 hours.

The tradition of saving a parking space after a snowfall is sufficiently common in Pittsburgh that the term “Pittsburgh Parking Chair” has entered the lexicon and been shortened to “Parking Chair;” it can be found documented on Wikipedia. Although the city officially does not support the practice and states that anyone has a right to claim any available space, it also does not sanction persons who attempt to reserve parking spaces with barricades.

Other cities, such as Washington, D.C., and New York, expressly prohibit the practice of reserving on-street parking spaces using barricades or other objects or devices. In these cities, the reserving object is removed and the responsible parties are ticketed. In New York City, the penalty for barricading a municipal parking space is up to $2,000.

IPI members who provide on- and off-street public parking spaces should examine state laws and local ordinances to determine if reserving parking spaces is prohibited or allowed under certain circumstances. Members should also determine if there is a need to promulgate their own rules and regulations regarding the practice.