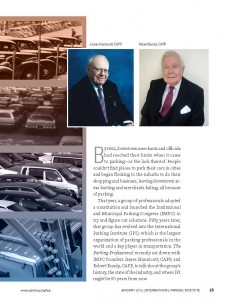 By 1962, downtown merchants and officials had reached their limits when it came to parking—or the lack thereof. People couldn’t find places to park their cars in cities and began flocking to the suburbs to do their shopping and business, leaving downtown areas hurting and merchants failing, all because of parking.

That year, a group of professionals adopted a constitution and launched the Institutional and Municipal Parking Congress (IMPC) to try and figure out solutions. Fifty years later, that group has evolved into the International Parking Institute (IPI), which is the largest organization of parking professionals in the world and a key player in transportation. The Parking Professional recently sat down with IMPC founders James Hunnicutt, CAPP, and Robert Bundy, CAPP, to talk about the group’s history, the state of the industry, and where IPI might be 50 years from now.

The Parking Professional: Tell us about your career up to the point that IMPC/IPI was founded.
JIM HUNNICUTT, CAPP: I had a degree in civil engineering and municipal engineering from Auburn University, which used to have a four-year course in those things. I went to work as a traffic engineer for the state of Georgia in Atlanta, and then went off to World War II. After that, I decided to go back to graduate school where I graduated with a master’s degree in traffic and parking from Yale. I’m still one of the few people who has a master’s degree in traffic and parking. I went to Chicago, which had just started a parking department to build 50 lots and garages in the city—the parking problem was really bad there. I started designing parking garages, and then went to the City of Nashville to be its parking department executive director. Six or seven years later, the mayor of Nashville and the president of the National League of Cities (NLC) took me to a meeting to see what it was doing about parking, and I got to know John McGillis, who was the director of parking in Detroit. He and I started trying to put together a parking committee at the NLC. We had meetings where people were standing five and six deep against the walls wanting to learn about what to do about parking—this was 1950 and everything was downtown, and there were no parking spaces. So we got the NLC to develop a policy that said the responsibility of parking fell on the municipalities, but that took some doing because the U.S. Chamber of Commerce and engineering groups were against us. After that, we thought we’d get together and start an association, and a group of us got together and wrote a constitution and bylaws. I presented those at an NLC committee meeting in Norfolk in 1960 and they turned us down. So I re-wrote it and presented it in Nashville in 1962, and they voted to go with it.
ROBERT BUNDY, CAPP: I was fairly young. I spent four years in the Navy during World War II—I was in the Canadian Navy on loan to the British Royal Navy with an aircraft carrier, taking the convoys into northern Russia to supply the Russian Army. Then I was in combined operations in Southeast Asia with the Indian Army, working in Burma and Malaysia. and other similar places. I returned to Toronto at the end of my four years and got a degree in commerce and finance from the University of Toronto, where I’d been at the beginning of the war. I went into real estate after graduation and was a real estate consultant to the City of Toronto. The city decided to create a parking authority, and I took over as the general manager.

TPP: Why was there a need for a group such as IPI?
JH: Colleges and universities didn’t used to have parking problems. Hospitals didn’t have parking problems. But they started to. Everything moved out of the downtowns and into shopping centers. The downtown buildings were old and everybody wanted new and modern stores with good merchandise. Rather than go downtown and fight with parking, they started going to the suburbs, and the downtowns slowly closed. Montgomery County, Md., established the first parking authority in 1947—that’s the first one I’ve been able to find—and other cities started establishing parking authorities to deal with their parking problems.
RB: The downtowns in North American cities had been decimated by the automobile, and it was here to stay. Real estate developers were taking advantage of that by creating shopping malls in suburban areas, and consequently the downtown of just about every municipality in North America was failing. Everybody was hurting. So the NLC parking committee was a stepchild of the organization. Everybody had their own ideas, and we thought it would be a good idea if we all got together specifically for parking instead of all kinds of other rush hour issues. We were concerned with the economic reality of life, and that was the fact that people were using their cars not only to go to work but to shop. We needed an organization to deal with parking and only parking.

TPP: How did people react when they heard about it? Did you face any challenges getting the group up and running?
JH: We got in touch with the parking authorities that were starting to be formed and asked them if they wanted to be involved. Most said yes. If they didn’t have parking authorities they had traffic engineers, and they were probably interested as well so we got in touch with them too. People didn’t know about parking, and in cities they’d get some politician to be parking director, or they’d appoint some college student to the job. They didn’t know diddly about parking and they wanted to join the association so they could learn something. We reached out to the people who had parking issues—racetracks, universities—and we told them we’d try and help them out.
RB: It just seemed like it was the right thing at the right time. People around us almost lined up after awhile to join. What really overwhelmed me was the interest shown by hospitals and universities. I have to admit, that took me by surprise. I didn’t realize they had the parking problems they did. In the post-war period, students at universities had automobiles—from my generation, that was unheard of! We did have challenges., There was a very well-organized effort by private parking interests that were opposed to us. Every time we did something, they were taking us to court. I appeared in court a number of times to justify us. We were encouraging keeping parking prices down to get people to park in the center of the city instead of going out to the malls, and those interests wanted to keep prices as high as they could get them.

TPP: If you had to list IPI’s biggest accomplishments through the years, what would you choose?
JH: We put together an industry. When we had our first conference, we had four exhibitors! Duncan Parking was one, Federal APD was one, and there was a consultant out of Cleveland and someone else. I’ve been to Japan and the Netherlands and Switzerland and all kinds of places where they’ve designed these huge garages. We showed people how to do that and how to adjudicate parking tickets. Parking has grown from nothing to a major industry.
RB: I think it’s the rejuvenation of downtowns, from small towns to huge cities. They all seem to be doing extremely well and I think that’s because the provisions of downtown parking allowed those city centers to reinvent themselves. Any municipality, whether it’s a village, a town, or a city depends on its central core for its economic and cultural viability. We helped achieve that. It didn’t happen overnight, but it happened.

TPP: Did you envision that IPI would grow as it has over 50 years? Did you envision such growth for the parking industry?
JH: Heavens, no. And the automobile as we know it will be around for the foreseeable future. I don’t know of a crazy helicopter that’s going to take the place of the car. It’s going to get bigger and more sophisticated.
RB: It never entered my mind. I thought the industry would grow simply because the automobile industry was growing so much. We went from residential streets where there was maybe one car for every two or three houses, to having two or three cars for every house. It didn’t enter my mind that the organization that is IPI would be so valuable and so active and so vibrant.

TPP: What advice would you give to parking professionals today to ensure their success?
JH: Go to school and get an education. There are plenty of courses you can take to study traffic and parking. Parking is nothing but traffic standing still. Learn to be somewhat successful—learn how things work and get the best education you can. You know, when we started thinking about the Certified Administrator of Public Parking (CAPP) program, we didn’t think it was a good idea. And the more we worked on it, the better the idea became. It’s a great education.
RB: Honesty is the best thing you can have. Don’t try to fool the public. You can only fool them for a short time. Be honest.

TPP: If you could go back and found IPI again, would you do anything differently?
JH: I don’t know what we’d do differently. We were very fortunate when we were getting started to have some of the top people anywhere helping us. Parking was a major problem at the time.
RB: No. I think IPI is a resounding success. I don’t think there’s anything different we could have done to make it better. It’s a successful organization—how could one fault it?

TPP: What do you think IPI will be like by the time it turns 100 years old?
JH: If there’s a need for something, somebody is going to come up with it. One of the big needs we always have in life is to do a better job. We have bad garages and there have been bad decisions made along the way. But we have a desire to do a better job and go out and do this well.
RB: I don’t know—I won’t be here! I wouldn’t have known what it would be like today 50 years ago. We’ve seen the mechanization of parking and taking advantage of the microchip to keep control of spaces and issue tickets. That’s the most important thing that’s happened in parking, I think. And IPI has always had very capable people running it. No organization is worth its salt unless it has good people. IPI has been very fortunate to have good staff people from top to bottom. I can’t take claim for that, but it speaks well for the organization.

The Parking Professional thanks Jim and Robert for participating in this article. If you see them at the 2012 IPI Conference & Expo in Phoenix, Ariz., please take a minute to say thanks for founding and leading IPI!