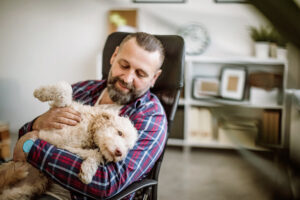 While navigating the pandemic, I stumbled onto a secret weapon: dogs as a role model. This began with a joke I read that hit a little too close to home:

“If your dog is fat, you aren’t getting enough exercise.”  -Unknown

The good news is, my dogs and I are getting regular exercise and we have all lost some weight! Having been inspired by what may be called Dog Humor, I discovered that some of history’s greats beat me to the realization that dogs are more than loving companions–they can also be a source of inspiration and even life wisdom. Below are some examples that were too good not to share:

The reason a dog has so many friends is that he wags his tail instead of his tongue.  -Anonymous

Don’t accept your dog’s admiration as conclusive evidence that you are wonderful.  -Ann Landers

If there are no dogs in Heaven, then when I die, I want to go where they went.  -Will Rogers

There is no psychiatrist in the world like a puppy licking your face.  -Ben Williams

A dog is the only thing on earth that loves you more than he loves himself.  -Josh Billings

The average dog is a nicer person than the average person.  -Andy Rooney

I wonder if other dogs think poodles are members of a weird religious cult.  -Rita Rudner

Anybody who doesn’t know what soap tastes like never washed a dog.  -Franklin P. Jones

If you pick up a starving dog and make him prosperous, he will not bite you; that is the principal difference between a dog and a man.  -Mark Twain

You can say any foolish thing to a dog, and the dog will give you a look that says, “Wow, you’re right! I never would’ve thought of that!'” – Dave Barry

If you think dogs can’t count, try putting three dog biscuits in your  pocket and then give him only two of them.  -Phil Pastoret

My goal in life is to be as good a person as my dog thinks I am.

L. Dennis Burns, CAPP, is regional vice president, senior practice builder, with Kimley-Horn and a member of IPMI’s Board of Directors.