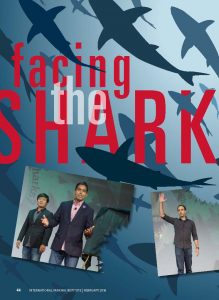 Last year’s IPI Park Tank™ contestants say the competition was fierce but came with huge benefits to their fledgeling companies.

ARE YOU READY TO JUMP INTO THE PARK TANK™? IPI launched its live game show, modeled after television’s “Shark Tank,” at the 2015 IPI Conference & Expo in Las Vegas and gave five parking entrepreneurs the chance to wow industry judges and launch their companies right there on stage. The event was popular with both fledgling companies and the audience in Las Vegas—so much so that a second Park Tank will happen at the 2016 IPI Conference in Nashville, Tenn., this May—but what happened to the entrepreneurs who jumped into the tank?

In a word: lots. After receiving great publicity to valuable feedback from judges and audience members after the show, the people who faced the judges and presented their ideas under the hot lights on stage say Park Tank was a fantastic springboard for their products and companies and they’d do it again in a heartbeat (your chance is coming up quickly—more on that in a few minutes!).

The Winners
Few attendees of last year’s Conference in Las Vegas will forget Smarking: From the clever name to the seamless live presentation its leaders presented at Park Tank, the company made a huge impression that’s continued growing since then.

“Outsmart your spreadsheet,” says the company, and its Park Tank presentation made a big splash. Company CEO Wen Sang says he knew Park Tank was a great idea as soon as he heard it, and he quickly applied for one of its five spots.

“The experience exceeded our expectations by far,” he says. “The setup of the event was quite amazing—it felt like a real TV show! It was also well-attended and did a lot for our business.”

“We are a company with a new technology and solution,” says Sang. “We need the critics and advice from the industry to refine and improve. Park Tank was the best opportunity for that as it gathered the best professional minds and technology pioneers and enthusiasts together.”

From the first time he heard about it, says Sang, he knew the game-show format and live audience presented an opportunity he couldn’t pass up. “Park Tank is the best ideas and product release publicity opportunity for Smarking as it has cross-sector and international exposure,” he says.

Other Participants
Smarking was just one of five Park Tank participants last year, and all said their experiences were worth the effort of putting together presentations and facing tough questions on stage.

“I was immediately excited about Park Tank when I was informed about it,” says Jeremy Crane, founder, StadiumPark, which offers a mobile app that gives users access to stadium and special-event parking. “I saw Park Tank as a very unique, innovative, and fun event. It was a great opportunity to showcase StadiumPark in front of parking professionals and investors.”

Brian Mitchell, founder of Advanced Parking Analytic Solutions, had a similar reaction. “One of the more difficult issues I have had in presenting our concept is the fact that it is very new and unproven,” he says. “The Park Tank at IPI has given the concept of analytics a great deal of credibility in the parking industry. As a result of the presentation, companies have been much more receptive to the concept of analytics.”

Participants said preparing for the event was a challenge— while they knew how television’s “Shark Tank” worked, there was no way to tell what parking judges might want to know about their ideas.

Crane says he spent time preparing his marketing materials for the judges and having them printed onto the on-stage displays for audience viewing. He also carefully scripted his remarks and practiced over and over to ensure they hit the mark in the allotted time.

All of the prep, he says, was definitely worth it in the end. “It was even better than I expected,” he says. “I thought the time, effort, and production put into the event was superb. The judges and companies chosen were great! As a result, I feel as though I got great exposure and made relationships that are valuable to this day.”

Sang took a bit of a different approach. His company had already worked with Y Combinator, a Silicon Valley venture-capital company that accelerates the value of startups, and received some training from that establishment, following in the footsteps of such firms as Airbnb and Dropbox. That experience, he says, gave him some ideas of what Park Tank judges might ask. Then, he says, “We rehearsed our pitch many, many times.” While it wasn’t hard to talk about Smarking’s ideas, doing so in a short period of time was a challenge.

“The hardest part was making sure we conveyed the goal of our business without running out of time,” he says.

What’s happened to the participating entrepreneurs since the show last summer? A lot—all of them say participating in Park Tank gave their ideas terrific legs.

“Since the IPI Conference has given me credibility, selling the concept to operators has been much easier,” says Mitchell. “I am working with operators in the sea to gain more insight to the type of information they need to make the product more marketable. The long-term goal is to create a software program that can provide my customers a user-friendly method of turning data into revenue-generating business decisions.”

Crane says participating in Park Tank gave him similar benefits. “StadiumPark continues to grow and progress each day,” he says. “Since the competition, we have been talking and meeting with venues throughout the U.S. We have continued to develop our application, which is more user-friendly and robust than ever before. We expect to begin service at a number of venues and raise our first round of institutional capital in the first two quarters of 2016.”

What about Smarking, which emerged victorious from the 2015 Park Tank? Sang says life is good.

“Our company has experienced a tremendous amount of traction,” he says. “As a new entrant to the parking industry, Park Tank provided a stage for us to share our business with many parking professionals. To date, IPI members still email or contact us simply because they remembered our pitch at Park Tank.”

Sang says the visibility of the event was great for his company, even more so because it won. “Winning the event provided us a certain credibility that provided a tremendous boost to our company,” he says. “On a personal level, we made great friends with lots of folks in the community and have felt beloved since then—this is indeed tremendous to an early-stage tech company like Smarking. Not every industry can provide such love to younger generations.”

KIM FERNANDEZ is the editor of The Parking Professional. She can be reached at fernandez@parking.org.