It’s not unusual anymore to get from point A to point B using a bus, a train, and bike- or scooter-share in a single journey. Google Maps announced yesterday it will soon add all those options and more to its trip navigation options, so commuters can plan their routes mixing everything from walking to micro-mobility to mass transit.

The new “mixed modes” option will shortly roll out under the site’s transit tab. Mass transit options will remain the primary mode of transportation there, but the site will figure in walking, ride-share, and micro-mobility options for those first and last miles, offering true door-to-door navigation for those not driving their own cars (it’ll still show parking options for those folks as well). 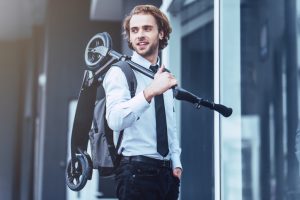 Just when you thought you had bike-sharing down, there’s a new trend in town and some say it might make the bike-share market seem tiny in comparison. It’s electric scooter-sharing, and spurred on partially by nostalgia, partially by practicality, and partially because it’s just fun, it’s predicted to be the next hot trend in transportation.

Several bike-share companies are launching similar systems for electric scooters in existing bike markets. Bird, a new player in the market, says they’ll introduce the vehicles in 50 markets this year, including Washington, D.C. LimeBike announced plans to take some dockless bikes out of its D.C. fleet in favor of scooters this year, too. Fans say the scooters are easier to maneuver than bikes, more comfortable for the operator, and much more practical to use in business clothes, making them particularly attractive to transit users who need that last-mile solution.

Are electric scooters coming to a share-system near you? Read the whole story here.