On July 30, 2016, a 1,000-year flood devastated Ellicott City, Md., wiping out sections of the historic downtown, carrying cars down the flooded street, and closing down businesses for months. No one predicted a flood of this magnitude, which dumped a total of six inches of rain on the town in less than two hours.

Then on May 27, 2018, less than two years later, an even worse flood dumped eight inches of rain on the town, again flooding Main Street. How could this happen? The only explanation local officials could give was “the effects of climate change.”

What does this have to do with parking? Plenty, if you think about it. First, there were many cars parked on Main Street and nearby surface lots that were washed away or damaged so badly they had to be scrapped. Second, Main Street was closed for months while buildings were demolished or restored, meaning parking revenues were affected. And even after Main Street reopened, there were fewer stores and fewer customers, so longer term parking revenues were lost.

A few years ago, I helped develop a strategic plan for the Golden Triangle Business Improvement District, in downtown Washington, D.C. One of the key elements of the plan was an emergency preparedness plan. In the District, every organization needs to be prepared for emergencies, natural and man-made. I was just starting my job at the International Downtown Association when a jet flew into the Pentagon and we were told that another was headed for the White House or the Capitol. We had no emergency plan in our office.

If you manage parking facilities in your town, how good is your emergency preparedness plan? Or do you even have one? What would happen if your town were hit by a tornado or hurricane? What would you do in the event of a 1000-year flood? What would you do if, heaven forbid, someone exploded a truck bomb in your garage? Do you have plans to mitigate human damage? Do employees have clear instructions and training in what to do in an emergency? Do you have necessary supplies—bottled water, blankets, etc.—in the event something unexpected occurs?

Expect the unthinkable and develop an emergency plan now before disaster occurs. Better to have it and not need it than to need it and not have it. 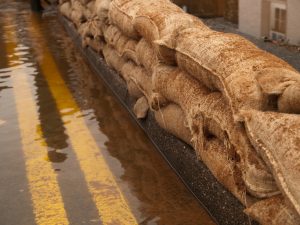 Hurricane Florence is bearing down on the eastern seaboard of the U.S., and is likely to slam into North Carolina in the next few days. With warnings out about the strongest storm to hit that part of the country in, perhaps, decades, IPI is keeping our members top of mind. We encourage you to prepare your facilities and your homes as best as you can, and to heed evacuation warnings if possible.

If you’re looking for help getting ready, IPI’s Emergency Preparedness Manual is a free member download, with multiple checklists and parking-specific information designed to help you stay ahead of storms like these.

Be prepared, be smart, and be safe. And please let us know how we can help.