We have launched your new IPMI member portal.  Click here to login, reset your password, and register for these free trainings. If you havece questions, or need assistance, please contact us here. 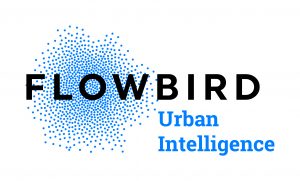 We have launched your new IPMI member portal.  Click here to login, reset your password, and register for these free trainings. If you have questions, or need assistance, please contact us here.

We are currently launching a new member portal. Please contact us at professionaldevelopment@parking-mobility.org to register.

Rahm Emanuel said, “You never let a serious crisis go to waste. And what I mean by that it’s an opportunity to do things you think you could not do before.”

Last year brought discussions of campus closures, telelearning, and teleworking. Within a week, these discussions were reality. When the awareness that this COVID thing would last longer than a few weeks, we started to look at how the lull could be used to keep the momentum of teleworking going as a demand-reduction tool.

To address all the issues for making teleworking an ongoing mobility strategy, we created a telework committee. Stakeholders from human resources, technology, safety and ergonomics, employee/union relations, communications, and finance. Transportation Services coordinates the committee, which will address the physical, legal, supervisory, and training issues and keep teleworking a viable mobility option into the future. Perry Eggleston, CAPP, DPA, has more than 25 years’ experience developing, refining, and implementing mobility programs as an officer, supervisor, manager, director, consultant, and executive director. In his career, he has served organizations in California, Kentucky, New Jersey, and Texas. He is an active member of the IPMI and California Public Parking Association. 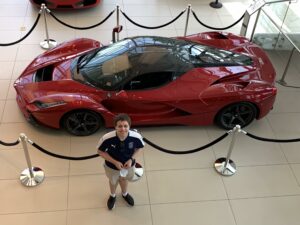 The LaFerrari was designed to be the Italian car company’s definitive, ultimate model. It was their first hybrid and their last mid-mounted 12 cylinder, roaring with 949 horsepower while saving 40 percent fuel consumption, zero to 60 in 2.4 seconds. Only 499 were made between 2013 and 2016, all sold by invitation to owners who largely remain anonymous, and most never driven to this day beyond contract-required service miles.

To my college-age car fanatic, it is, as Joe Pesci once said, the silver tuna—as the company intended, the ultimate hypercar, the most elusive, the one car guys chase a glimpse of for years. When one popped up at the dealer about 45 minutes from our house and somehow hung around until his on-campus summer project ended, there was no question about it: We were going.

We’ve been to high-end dealers to see other cars before and the drill is generally the same: Park my Subaru next to a wall of glass at the side and spend an hour taking photos, talking about every nuance of the cars, and being soundly ignored, generally with a downward facing, slightly annoyed sniff, by the designer-suited staff.

Ferrari was different. Same wall of glass, same Subaru, same young man and dopey mom, but a coiffed salesperson put a little hop in his step to open the door for us and smiled and replied, “Of course, my pleasure,” when I thanked him. Every person there greeted us when they walked by, including the service staff when we snuck back to see what treasure was on the lifts that day. One salesperson even stepped to the side of the steps leading up to the lofted office level to let us go first when we ran up to get photos of the beast from above, and nobody said a word when we reached a camera over the velvet rope to get a better shot of the bright red silver tuna’s black, carbon fiber logo—or when we peered inside the five other 30-year mortgage-priced cars in the room.

The LaFerrari the kid finally saw has 100 miles on its glass-enclosed engine and shines for days. It originally sold for just more than $1 million and is currently priced at $3.5. Someone will buy it and stash it away in a garage as an investment but it won’t be anyone remotely like us. And it didn’t matter. We were treated like customers—valued ones. It was, honestly, shocking in the very best way.

I am replacing “the Nordstrom of customer service” in my own vernacular. From here on out, it’s the Ferrari of customer service, for going above and beyond when they clearly got nothing out of it and there was zero return. I’ll remember that a lot longer than what cars we saw that day, and hope it sunk into the college kid’s head a little bit along with the thrill of finally catching way more than a glimpse of his elusive prize. It’s a lesson that’ll serve him well.

Kim Fernandez, CAE, is IPMI’s director of publications. This was published in the September 2021 issue of Parking & Mobility magazine, free to all IPMI members. 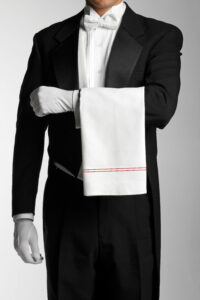 Register here for this webinar.

Digital marketing is now a required element of good business. Learn to use social listening to analyze your organization’s digital footprint and social media presence. Provide responsive and timely campaigns that meet the needs of your target audience and help your organization do business better. Melonie Curry has developed customer educational materials for ParkHouston that share parking tips to educate the public and make parking easy and convenient. She manages ParkHouston’s social media and website and recently completed a digital marketing certification from Cornell  University. She served on the Texas Parking and Transportation Association’s Host Committee and helps manage social media. She is a member of the Social Media Advisory and Research Taskforce (SMART) and works on the Cultural Change Coalition to improve department collaboration in the City of Houston.

Non-members may attend for a $35 registration fee.  Click the register link above to attend as a non-member.  Need help logging in?

NOT A MEMBER? JOIN TODAY.

Flipping the Script on Customer Service

Understanding perceptions and reality when the shoe is on the other foot can be essential to improving customer service at every level.  This upbeat session will include role playing and a healthy dose of fun as we review and assess the actions and reactions between customers and our frontline customer service and enforcement personnel. Takeaways will include an effective tool to help you keep your cool in stressful situations. Vanessa Cummings, CAPP, has 25 years of experience in parking, transportation management, and supervision. She’s passionate about inspiring and empowering people through real-life experiences and humor to teach and mentor. As a pastor, parking professional, and consultant, she serves as a trainer, meeting planner and facilitator, and inspirational speaker. She has provided training and consulting for IPMI, colleges, universities, regional conferences, and churches for 19 years.

$30 per attendee, or $75 for any three Frontline Friday sessions.

The California Public Parking Association (CPPA) in partnership with IPMI is hosting this presentation that will review the California Consumer Privacy Act of 2018 and various state efforts to protect the privacy of its citizens, including: Sue Friedburg is the co-chair of Buchanan’s Cybersecurity and Data Privacy Group.  Sue advises clients about the rapidly evolving standards of care for safeguarding confidential information and responding effectively to security incidents that threaten to compromise our client’s valuable or protected information.  Sue has extensive experience advising clients on the fast-changing world of consumer privacy laws at the federal and state level. Robert Holland regularly advises clients from all business sectors on the impact of consumer privacy laws and legislation that continue to be a hot topic across the United States.  Bringing his experience to businesses offering a variety of products and services, Rob helps them address the sometimes thorny implementation issues related to the laws.  No two businesses are the same, and Rob brings that recognition to help each business craft a unique approach to protect their customers and their reputations. Jason Wrona is a legal veteran to the parking industry, having served as counsel to a number of public and private parking operators and related businesses.  Notably, Jason has served as the outside counsel to the Pittsburgh Parking Authority for more than 10 years.  He has a deep understanding of all facets of the parking industry and is proud to be counted as a “parking nerd.” 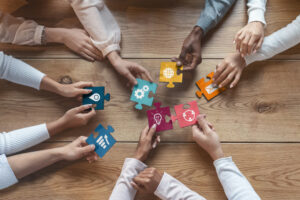 Very seldom as a manufacturer or contractor do you find true team efforts when replacing a client’s legacy equipment. A true team effort is when the client fully engages in the change.

It’s important as a client that you involve yourself in efforts to learn your new products and not just expect a turnkey system to run without your input or interest. Nobody likes changing. It’s a lot of effort, especially when you had a functional system in place chugging right along.

It’s important as the installer to remind yourself what a frustrating process large-scale change is to a client as well, and have compassion for them. You must make sure you are doing everything you can to take the pain out of the change. For example, a client may point out how the user interface could be enhanced in a way that makes it more intuitive, or they could find a bug. In either case, taking that information and making changes creates a better product. Customer satisfaction increases because you listened and made things easier for the client.

If both sides invest in this approach and truly partner, the end result becomes a win for all involved.