Parry Gripp and National Car Charging are charging up kids everywhere with a new song about electric cars. 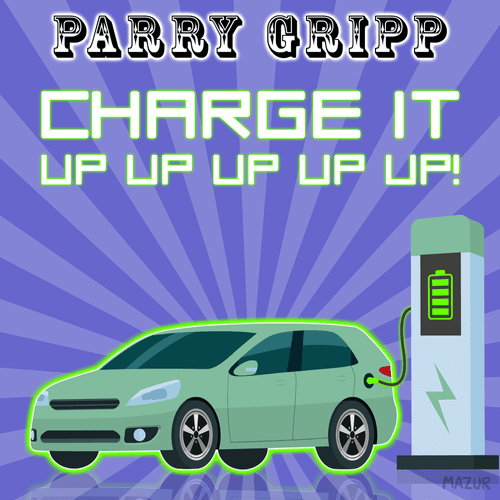 DENVER, CO – Emmy-winning songwriter and YouTube sensation Parry Gripp and the nation’s leading privately-held distributor and installer of EV charging equipment National Car Charging have teamed up on a new song all about electric cars, and are charging up the internet with Charge It Up Up Up Up Up!

The song came to be after Jim Burness, the CEO of National Car Charging, bid on the opportunity to work with Parry as part of the Greater Los Angeles Zoo Association’s Beastly Ball Silent Auction. “My daughter and I are long-term fans of Parry’s. I mean, how could you not be? His songs are irresistibly catchy and fun, and all of the kids I know love them,” Burness shared.

Burness, who has made a career out of advocating for the environment and building EV charging infrastructure throughout the country, realized immediately he wanted this opportunity to go beyond making him the coolest dad in the neighborhood.

“The reality is our planet is at risk. Climate change is very real and that matters most to the kids who love Parry’s songs. Emissions from gas cars are one of the biggest contributors to global warming, so in the spirit of Woodsy Owl, Smokey Bear and School House Rock, who more than fifty years ago taught our generation about pollution, wildfires, grammar, and civics, I challenged Parry to create an infectious and memorable song about electric cars and how they
can change our kids’ future.”

Parry Gripp, whose songs have been described as “channel(ing) childhood obsessions with aerodynamic ferocity” and has attracted famous fans like Norah Jones, was completely up for the challenge.

“I loved that Jim, who was already supporting a great cause, wanted to do something bigger,” Gripp stated. “There is no better way to connect with kids and get the message out than through music. We all know the words to Conjunction Junction, I’m Just A Bill and Lolly, Lolly, Lolly Get Your Adverbs Here and messages behind them because of the unforgettable lyrics and we wanted to try to recreate that magic with Charge It Up Up Up Up Up!”

Piling onto the fun and the environmentally-friendly theme, Parry Gripp, an EV driver himself, produced the song completely off the grid. “I couldn’t think of a better way to record Charge It Up Up Up Up Up! than for it to be the first
production in my new solar-powered studio – from beginning to end, the recording was entirely powered by the sun.”

The release of Charge It Up Up Up Up Up!, whose lyrics embrace all the benefits of driving electric (So fun! So fast! Acceleration is a blast. So clean,so quiet. No buying gas. You gotta try it!), comes out just in time for Fully Charged LIVE in San Diego running September 10th-11th along with this year’s annual National Electric Drive Week (NEDW) which begins September 27th. Both events are designed to showcase the benefits of clean energy and driving electric. NEDW, specifically, is a fun, nationwide celebration raising awareness of driving electric and giving drivers the chance to test drive an EV all around the country.

Parry Gripp fans and EV enthusiasts alike can listen to Charge It Up Up Up Up Up! on Spotify, Apple Music, Amazon Music, and other streaming services beginning September 9th.

About Parry Gripp
Parry Gripp is an Emmy-winning songwriter, advertising musician, children’s book author and recording artist, whose best-known works include Raining Tacos, songs for Netflix’s Ask The StoryBots, and theme songs for Disney’s The 7D, the Cartoon Network’s Ben 10: Omniverse, and Marvel’s The Super Hero Squad Show. Gripp is also the mastermind behind Wawa’s popular Hoagiefest ad campaign as well as many jingles for Hasbro Games including Elefun and Friends, Hungry Hungry Hippos, Chasing Cheeky, and more. In 2017, National Geographic Kids released his first children’s book Somebunny Loves Me. Gripp also hosts a widely popular YouTube channel which features many hits and boasts over 400 million views. Older fans might recognize Gripp’s style in the theme song to Buffy the Vampire Slayer which he wrote and recorded with his band Nerf Herder. To learn more about Parry Gripp and his whimsical work, visit: parrygripp.com.

About National Car Charging (NCC)
National Car Charging (and its sister company Aloha Charge) is the leading privately-held distributor and installer of EV charging equipment in the US. For more than 10-years, their core mission has been to make the transition to electric vehicles as easy as possible by offering the most reliable, cost effective EV charging hardware and software products. NCC works with universities, municipalities, developers, car dealers, multi-family housing providers among others to plan and install smart EV infrastructure solutions for the growing number of EVs and electric business fleets on the road. NCC partners with nine highly-vetted hardware manufacturers and five networking providers including ChargePoint, Shell Recharge Solutions, EVPassport, Enel X, and JuiceBar. The company has sold/installed over 7000 charging ports nationwide and has had projects in 48 states with nearly 900 customers. To learn more, follow NCC on Twitter (@NatlCarCharging), Facebook
(@NationalCarCharging), YouTube and LinkedIn, or visit nationalcarcharging.com.

For more information on the musical collaboration between Parry Gripp and National Car Charging, please contact Margaret-Ann Leavitt, SVP of Marketing at mleavitt@nationalcarcharging.com or 303-596-9199.