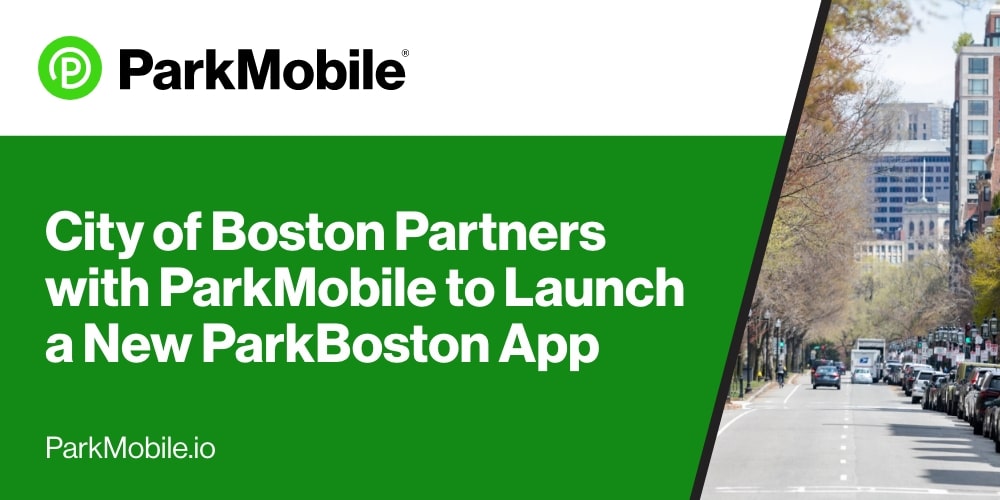 Boston, Massachusetts – ParkMobile, a provider of smart parking and mobility solutions in North America and now part of the EasyPark Group, announced today a partnership with the City of Boston’s Transportation Department to launch a new and improved ParkBoston app on August 15. The new city-branded app, powered by ParkMobile, will replace the current version of the ParkBoston app offering an enhanced user experience and more functionality. ParkBoston users will be able to easily pay for parking right from their mobile device in over 7,000 spots across the city and in any other location in North America where ParkMobile is accepted. Current ParkMobile users can also use that app to pay for parking in Boston.

“We are very excited to launch our upgraded ParkBoston app, providing our residents and visitors with a better way to pay for parking on their mobile device,” said Jascha Franklin-Hodge, Chief of Streets for the City of Boston. “This new app offers an improved user experience and supports our goal of making City services convenient, clear, and accessible to residents and visitors.”

With the launch in the City of Boston, ParkMobile expands its presence in Massachusetts, where there are already almost 500,000 users of the app. ParkMobile is widely available across the state in cities like Amherst, Holyoke, Northampton, and Somerville, as well as on-campus at the University of Massachusetts and Bunker Hill Community College. Beyond the state, ParkMobile can also be used to pay for parking in many New England cities like Burlington, VT, Greenwich, CT, Stamford, CT, Portsmouth, NE, Bar Harbor, ME, and Hanover, NH. Across the US, ParkMobile is available in over 500 cities and 125 universities.

The ParkBoston app is available for both iPhone and Android or can be accessed on the web at https://park.boston.gov/. Those with the old version of the ParkBoston app will have to update the app to the new version in the App Store or turn on auto-update so the app is automatically updated on launch day. The old version will no longer work after August 15. To pay for parking using the new ParkBoston app, users will need to create an account, enter the zone posted on the stickers and signs around the parking spot, choose the duration of time they wish to park, and touch the “start parking” button. The ParkBoston app will send alerts when the parking session is about to expire so a user can extend their time right from the app. Those who do not want to create an account can check out as a guest on the park.boston.gov website.

“We are very proud to launch the new and improved ParkBoston app,” says Jeff Perkins, CEO of ParkMobile. “We know our solution will provide a better parking experience for residents and visitors in Boston. We now have most major cities along the Northeast Acela corridor, making it easy to use ParkMobile or our city-branded apps from Washington, DC to Philadelphia to Boston.”

About ParkMobile: ParkMobile, LLC is the leading provider of smart parking and mobility solutions in North America, using a contactless approach to help millions of people easily find, reserve, and pay for parking on their mobile devices. In 2021, ParkMobile became part of the Swedish-based EasyPark Group. The company’s technology is used in thousands of locations across the country, including 8 of the top 10 cities as well as college campuses, airports, and stadiums. People can use ParkMobile solutions to quickly pay for on-street and off-street parking without having to use a meter or kiosk. Additionally, ParkMobile offers parking reservations at stadium venues for concerts and sporting events. Reservations are also available in metro area garages, allowing people to drive into the city without having to worry about finding parking. ParkMobile has been named to the Inc. 5000, Deloitte Fast 500, Smart Cities Connect “Smart 50,” and the Atlanta Journal Constitution’s Top Workplaces. Additionally, the company won the 2022 Stevie Awards for Best Mobile On-Demand Application. For more information, visit ParkMobile.io or @ParkMobile on Twitter.