LOGIN
Search
Home / IPMI Blog / Climbing Up and Reaching Down 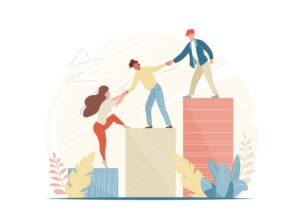 Larry Culp, CEO of General Electric, has been in the news a lot this week. I must admit that I didn’t know who he was until last winter, when my daughter and a tiny college in a tiny town on Maryland’s Eastern Shore chose each other. I told a neighbor about it when I ran into her walking dogs, and she said “Oh, you know, Larry Culp went there,” sending me scurrying for Google when I got home.

A few months later, the college hosted an online gathering for its incoming freshman class–and Larry Culp. I expected him to stay on the call for five minutes, maybe read a carefully worded statement about his affection for the school and some keys to achieving success, and make his exit.

What actually happened is that he talked a bit about the school and the town, shared his love for his farm nearby, told the students about the small shops and restaurants he’s invested in the little downtown and invited him to try them and let him know what they thought, and then stayed for quite some time answering whatever questions they wanted to throw at him. He was friendly, approachable, insightful, funny, instantly likeable, and more than generous with his evening, even after what I can only imagine was a very busy day of work that probably hadn’t ended yet.

The school’s entire student population is less than 1,500–super tiny by university standards. Culp spent that evening with less than a quarter of that number, sharing his appreciation for the school, the lessons (in and out of the classroom) he credits with his success (in and out of the boardroom), and without saying it, the value of giving back. Lots of people in his position make generous monetary contributions that make a huge difference and he has too, but this was different. He took the time and energy to reach back down the ladder from his top rung and start encouraging others up. And that’s something.