TAMPA, Fla. (April 20, 2021) – The University of South Florida is taking steps to support a more sustainable environment by debuting its first zero-emission electric bus in the Bull Runner fleet on the Tampa campus.  The new Proterra 40-foot Catalyst E2 bus will roll out for the first time on Thursday, April 22, in conjunction with Earth Day.

According to the manufacturer, replacing a diesel bus with an electric bus reduces carbon dioxide emissions by 230,000 pounds annually, which is equivalent to planting 5,000 trees.  Electric buses also produce less noise pollution in the community and offer riders a smoother experience. 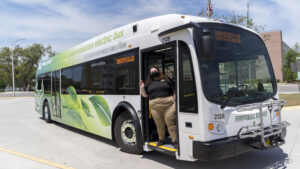 “The University of South Florida is excited for the continued partnership between Parking and Transportation Services and the Student Green Energy Fund that has made this project possible,” said Raymond Mensah, director of USF Parking and Transportation and a member of the Student Green Energy Fund Council.  “By launching a zero-emission electric bus, we are making a large stride in reaching our sustainability goals and reducing our carbon footprint.”

The new bus weighs approximately 37,000 pounds and can hold up to 70 passengers. It can travel up to 350 miles on a single charge.  The bus can be fully charged from zero percent battery life in approximately six hours.

About the University of South Florida

The University of South Florida is a high-impact global research university dedicated to student success. Over the past 10 years, no other public university in the country has risen faster in U.S. News and World Report’s national university rankings than USF. Serving more than 50,000 students on campuses in Tampa, St. Petersburg and Sarasota-Manatee, USF is designated as a Preeminent State Research University by the Florida Board of Governors, placing it in the most elite category among the state’s 12 public universities. USF has earned widespread national recognition for its success graduating under-represented minority and limited-income students at rates equal to or higher than white and higher income students. USF is a member of the American Athletic Conference. Learn more at www.usf.edu.