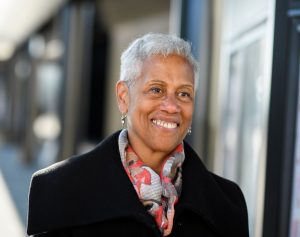 My parking career started at Rutgers University in 1988, when I began working as the first assistant director for administration of the university’s parking department. I had an amazing mentor, Rita Molnar, the first woman president of IPMC (now IPMI), who got me involved in the association and taught me everything I know about the business. Here we are at a campus event.

Within a year Rita retired and I was promoted to director of parking and transportation—becoming the first person in the newly-created position—working in that capacity until 1994, when I left to become the director of technical services (DOTS) for IMPC, which later became IPI, which is now IPMI, answering members’ technical questions and planning seminar and conference meeting content. During my IMPC/IPI days I was promoted to director of professional development, assisting with the launch of IPI’s onsite frontline training, editing The Parking Professional magazine, IPI publications and conference management; then was named vice president of the association; and eventually became executive director of the association.

After 15 amazing years working for the association, it was time to return to the parking industry’s daily operations and to that end, I accepted a position at Princeton University as their first director of parking and transportation services. I became a member of the IPI Board of Directors in 2009, and was elected as Board Chair at the 2015 IPI Conference & Expo in Las Vegas.

A class of 2000 CAPP graduate and a Past Chair on the IPI Board of Directors. I have been truly blessed to be the “first” many time in this industry, to have been touched by SO many in the industry, to have given back when possible—within 32 short years I have had the unique opportunity to go full circle.