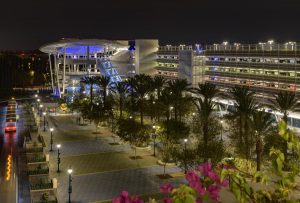 Disneyland Resort is the No. 1 tourist attraction in Southern California. The Pixar Pals Parking Structure was designed and constructed to accommodate guests and cast members.

Branded wayfinding elements designed by Disney Imagineers are located throughout, including levels named after Pixar characters. Once guests exit their vehicle, they are directed to a dedicated pedestrian walkway along the east edge of the structure that leads to the vertical circulation core. This core includes elevators and stairs, along with the adjacent feature “rotunda” containing a series of escalators serving all levels of the garage.