LOGIN
Search
Home / IPMI Blog / NYE on the Strip: Party with 300,000 of Your Closest Friends

NYE on the Strip: Party with 300,000 of Your Closest Friends 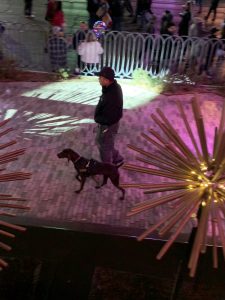 Editor’s Note: The IPMI Blog is re-posting some of our biggest hits from 2019 through the holidays. New posts will resume on January 2.

It is 5 p.m. on New Year’s Eve. Freeway off ramps leading to the Las Vegas Strip are being shut down to vehicular traffic. By 6:15 p.m., all major east/west arteries that access the Strip will be closed. By 7 p.m., there will be a hard closure of all inbound roads from Sahara Avenue to the north and Russell Road to the south. Hotels are at full occupancy and the parking garages are overflowing.

Approximately 300,000 adults are expected on the Strip this evening. No one under the age of 18 is allowed on the Strip after 6 p.m. on New Year’s Eve. All backpacks, strollers, glass containers, and coolers are prohibited.

One new addition this New Year’s Eve are the 1,600 bollards placed along the Strip to protect pedestrians. Revelers will see Nevada National Guard members, an increased amount of Metro police officers, K-9 units, and may even spot overhead police snipers. All efforts to maintain a safe, peaceful and enjoyable evening have been deployed.

Fast forward to 11 p.m.:  The parties continue at bars, clubs, and hotels up and down the Strip, but as midnight approaches, the crowds congregate along Las Vegas Blvd,. so they can get a glimpse of the fireworks that will be lit atop seven hotels along the Strip at the stroke of midnight. The spectacle lasts almost 10 minutes, and everyone heads back to parties or home for the evening.

At 3 a.m., the cleanup begins, and tons of trash and party favors clutter the street. By 6 a.m., it is back to normal on the Las Vegas Strip. Overall, a calm night with only a few citations for public intoxication.