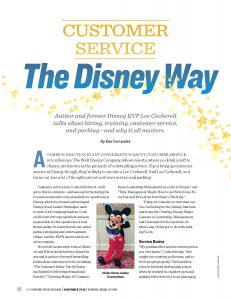 A COMMON REACTION IN ANY CONVERSATION ABOUT CUSTOMER SERVICE
is to reference The Walt Disney Company, whose resorts, where no detail is left to chance, are known as the pinnacle of outstanding service. If you bring up customer service at Disney, though, they’re likely to mention Lee Cockerell. And Lee Cockerell, as it turns out, has a lot of thoughts about customer service and parking.

Customer service is in Cockerell’s blood—we’ll get to that in a minute—and was a priority during his 10 years as executive vice president for operations at Disney, where he created and managed Disney Great Leader Strategies, used to train 7,000 company leaders. Cockerell led 40,000 cast members and was responsible for the operations of four theme parks, 20 resort hotels, two water parks, a shopping and entertainment village, and the ESPN sports and recre­ation complex.

He served in executive roles at Marri­ott and Hilton hotels before joining Dis­ney and is author of several bestselling books about customer service, including “The Customer Rules: The 39 Essen­tial Rules for Delivering Sensational Service;” “Creating Magic: 10 Common Sense Leadership Strategies from a Life at Disney;” and “Time Management Magic: How to Get More Done Ev­ery Day and Move from Surviving to Thriving.”
Today, he consults on customer ser­vice, including for the Disney Institute, and hosts the Creating Disney Magic: Lessons in Leadership, Management, and Customer Service podcast. So what’s any of this got to do with park­ing? Lots.

Service Basics
“My grandmother was the nicest person you ever knew,” Cockerell says. “She taught me courtesy, politeness, and to treat people properly.” He heard her voice in his head during high school, when he worked in a lumber yard and making deliveries for a local pharmacy, and learned at an early age that her simple words car­ried a lot of wisdom.
“I learned early on to just be nice to people and don’t let it get to you when they misbehave. They’ve got problems you don’t know about. They don’t know you so they can’t be mad at you personally.” The the­ory served him well, and in 1965, he started waiting tables at the renowned Washington Hilton, where showing up on time, doing his job carefully, and al­ways being nice soon earned him a promotion into management. That, he says, taught him the second big lesson of his career.

“The best way to have a good life is to have a good attitude and be organized,” he says. “When you’re re­liable and you have a good attitude, you’re going to do pretty well.”
The promotions kept coming and, he says, always came as a surprise as he never felt expert enough to move up to the next level. And that, he says, was the third les­son: “Nobody knows what’s going on. I was in good com­pany feeling that way, and attitude is the No. 1 thing.”

A career in customer service with the company that values it more than anyone solidified that lesson, which he continues teaching today, and which he tells clients should guide their hiring more than anything.

Hiring and Training
“We were very careful who we brought in,” Cockerell says of his time at Disney. And it might be surprising what the company looked for in applications and interviews.
“We’re always looking for passion and attitude. We can train you to do 99 percent of the job unless you’re an attorney or an IT person. So we look for the person with the passion and attitude first,” he says. Those things come through in an interview and almost always trump hard skills. That’s where training begins.

Disney developed a video all new hires watch be­fore they do anything else. It doesn’t teach specific job skills, but it does outline general expectations, most of which center around customer service and attitude while on the job. That means no arguing, no yelling, and service with a smile.

“People don’t always understand the ramifications of their actions,” he says. “We want professionals, not people digging deep into their own problems to react to a customer. It’s like your mother said every day—­remember your mother. She told you over and over and over how to behave.”

The film also explains the rules for Disney staff, including strict dress codes and personal expectations. And about a quarter of new hires decide after seeing it that their new job isn’t a great fit. “They decide they don’t want to work here because they don’t like the rules,” says Cockerell. “That’s fine with us.”

Disney has a point system for employees, says Cockerell, and it works very well. Employees get a point every time there’s a complaint, a point for showing up for work late, a point for violating the dress code. Points have a shelf life, and it’s possible to get rid of them in a year. “If you get 12 points, you’re gone and everyone knows that,” he says. “But it spells out what infractions are causing problems for people. If you want to have an argument every time a customer starts one, that’s your decision. And we make it clear that these are good people who fire themselves. We don’t fire them.”

From there, the training continues with lessons, conversations, and tests on the material. And they ex­plain why some of the rules exist—a strategy Cockerell says would work well in parking.

“If you train your people that they can’t raise their voices, they’ve got to also know what the consequences are,” he says. “It’s not in your job to do any yelling. Your job is to give out the ticket. When you’re encountered, you’re not going to do any fighting back. With the world the way it is, you’re going to get hurt one day. There’s a huge problem of anxiety—people are wired—and that’s a consequence. Train that from the beginning.”

Training, Cockerell says, is a chance to create the right culture from the ground up. “We have a discussion that says we want you to be great at this and we’re going to work with you to get there,” he says. “Frankly, a lot of times, governments aren’t very good at this. They just hire and put people out there. Everything can be done better, and it’s never too late to get better. We wake up every morning wondering how we can do things better, how can we train our people better. When you make your people better, your organization gets better, and your people are both your brand and your state of mind.”

Parking
“If I was running parking in New York City, I’d have a different program than they have now,” he says. “We’d be connecting and touching people. We’d have videos, audio recordings, and they’d get a lot of recognition.” And all of those materials would be for both employees and the public, because sometimes customers need training, too.
“We’d get the message out there: Don’t beat up on the poor guy out on the street who’s just trying to do his job. There’s a lot you can do about that over time and people start to stand back, say you’re right, and commit to not doing that again. You end up with more focus by citizens on the people doing their jobs.”

The Customer Service Rules
Cockerell’s book, “The Customer Rules,” spells out 39 specific rules for offering outstanding customer ser­vice. They apply to any business, he says, from Disney to parking. A few examples:
• Never, ever argue with a customer. “The louder they yell, the quieter you get,” Cockerell says. “It’s easy to have somebody yelling and start to think, ‘I hate this. I wish I was doing something else. This jerk is talking to me like this from his big Mercedes and I want to get even.’ Just don’t do it.” He recommends letting the person finish his or her tirade and then speaking in a quiet, very calm voice. “Be polite and professional,” he says. “You can apologize: ‘I’m sorry my job requires me to give you this ticket. I wish I didn’t have to, but it’s my responsibility.’ Do not let people control you—start by controlling yourself.”

• Great service follows the law of gravity. A great on­boarding program is job one of managers, Cockerell says, but leading by example is a close second. “Yelling at people usually gets you very little except in trouble,” he says. “It starts at the top. People in cities need training to understand there are ways to over­come these situations. If it gets bad enough, people will quit, and you don’t want turnover. Remember that once you train people how to be professional, you’ve improved their lives. When you become great, it affects your children and grandchildren and on down the line. It becomes your legacy.”

• Be a wordsmith—language matters. “The words you use in daily life are important,” Cockerell says. “How many people want to be called a subordinate?” Once managers get it, it’s important to train everyone on words to use and not use in every situation. Cockerell recommends creating a booklet of scenarios and possible language to use, from the person who didn’t feed the meter on up. “Use language to be the bigger person,” he says. “When you get riled up, it ruins your whole day. How many of us end up upset about something we said?”

• Look sharp. Disney has refined its dress code by asking focus groups what’s appropriate and not over time, but some rules remain: No cotton pants (they wrinkle too much), no golf shirts (they can look slop­py), no reflective sunglasses (customers want to see people’s eyes when they’re talking). Cockerell says it’s important to dress people for the job and indus­try they’re in. “I would have my parking staff in very professional uniforms,” he says. “Make them look like a million dollars. People are less likely to work them over if they look really sharp. Make them look as official as you can.”

• Apologize like you mean it. “It doesn’t bother me to say I’m sorry,” Cockerell says. “I’m sorry this hap­pened. I’m sorry the meter ran out. I’m sorry you didn’t understand the sign. But I’m required to write this ticket. I‘m required to tell you that you have to do this or that. I’m sorry, but I’m required.”
What about the old rule that says the customer is always right? It stands—sort of. “The customer is not always right,” says Cockerell, “but he or she is still the customer. We want to save this relationship. We want to avoid an argument. We don’t want to have this back and forth. Like the song says, let it go.” It doesn’t mean invalidating a citation or ignoring an offense, but it does mean avoiding the yelling.

“Do you want me to discuss your problem or do you want to just keep yelling at me?” he recommends as an answer. “Companies now have to deal with violent people who are unreasonable. You’re not going to take the ticket back just because somebody’s yelling. So you have to sit down as a group and figure out what the strategy is going to be.”
Above all, he says, ingrain in everyone that these jobs matter. Parking and mobility keep everyone mov­ing, and it’s critical to never lose sight of that. Every person is critical to the mission.

“These jobs are hard,” he says. “All of them are hard. Being a parent is hard. So you’ve got to do hard things. But to do that, you’ve got to know why they matter.”

KIM FERNANDEZ is IPMI’s director of publications and editor of The Parking Professional. She can be reached at fernandez@parking-mobility.org.