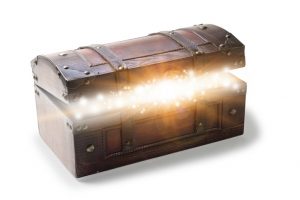 Anyone who’s ever renovated an old house knows you might find just about anything behind cabinets, walls, and trim. But a renovator in Champaign, Ill., stumbled on a truly rare find—parking treasure.

David Kristovich was tearing apart a closet in his 100+-year-old home to make it larger when a folded bit of paper fluttered to the ground. Unfolding it, he discovered a 1941 parking ticket that had likely been tucked away so other occupants of the house would never find it (well played, intrepid scofflaw).

Kristovich’s daughter, Erin, took a copy of the ticket to the police department for further investigation. As it turned out, the ticket was written by the department’s first African American career officer, who made out the tiny slip a very long time ago; he retired in 1975. The police said the offending parker would have likely been summoned before a magistrate and fined about $.50. The family plans to hold onto the ticket; after all, you don’t just give treasure away.