Where the Dinosaurs Parked 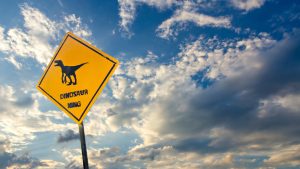 Plans to tear up a parking lot to make room for a new building at NASA Goddard Space Flight Center in suburban Maryland were delayed not too long ago by dinosaurs. Dinosaur footprints, actually, which made it apparent that people weren’t the first creatures to park on that land.

Seems Ran Stanford, an amateur dinosaur fossil hunter was meeting his wife for lunch at the facility when something caught his eye just off the parking lot. It was a slab of stone that he was pretty sure had dinosaur footprints in it. Problem was, that piece of land was due to be ripped up any day, along with the adjacent parking lot, for construction of a new building. Stanford called a higher-up at NASA and explained what he’d seen; the NASA guy thought it was a little off, but probably worth following up on.

He was right. As it turned out, Stanford had spotted one of the great dinosaur finds of the century. His slab of rock, once uncovered and cleaned up, was discovered to have a whopping 81 dinosaur footprints in it, preserved for all time—and almost lost forever.

Is the lesson that dinosaurs loved parking too? Be careful plowing up old spots? Heed legends of treasure trapped under asphalt? Probably not. But we thought it was a cool story. Check out the rest of it, including a diagram of all 81 prints and illustration of the beasts that made them, here.