LOGIN
Search
Home / IPMI Blog / First, Be Kind to Yourself

First, Be Kind to Yourself 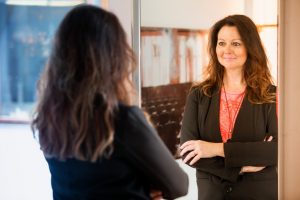 I recently felt shame for the first time in a long time. Not your average “uncomfortableness” but real shame. And then immediately, I was ashamed of feeling shame.

Often in my work as a public involvement specialist, I receive copies of letters that are submitted to town/city officials (good and bad). Typically, these are fairly straightforward. This time, however, at the end of one of those long letters, the gentleman included a p.s. that said (I’ll paraphrase for brevity), “your consultant should dress more appropriately, not like she is going out on a date.” Did I embarrass my client? What was I wearing that day?

Heart racing, my mental spiral worsened as I tried to think back to every detail of that day; the public meeting, my posture, the cut of my dress and the suit jacket. This shame spiral went on for several minutes until I realized that his comment wasn’t about me at all. The letter-writer was simply using an ad-hominem (personal) attack to discredit me because he didn’t like what was being proposed (paid parking).

Many of us are often in the hot seat whether we’re in front of city council or our supervisors, being stared down by a reporter or angry customer, or simply trying to do our jobs and write a parking citation. I think we sometimes overlook how many times a day we’re filled with silent shame because of something someone said (or something we assumed with their silence); we’re berating ourselves internally because we messed up, we’re telling ourselves over and over again that we’re just not good enough. The challenge to all of us is to recognize these moments of self-abuse and to do the hard work to turn each one into a moment of self-coaching. The saying that “you wouldn’t let a friend (or customer) talk to you the way you talk to yourself” may be trite and over-used but it couldn’t be more true. How you talk to yourself can instantly change your mood and ability to focus (short-term impact), and when constantly repeated, this negative internal self-talk can impact your confidence professional ability, your relationships, and even your health.

Remember to take a few minutes and recognize how you are communicating with yourself. Go for a quick walk, phone a friend, write a feisty response and then toss it in the garbage, or blog about it to hundred of your closest industry peers! Whatever your strategy, first, be kind to yourself because at the end of the day, there is one person who should always have your back: you!

Vanessa Solesbee, CAPP, is president of The Solesbee Group.