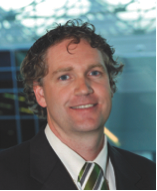 Porter commutes by bike to work each day – a 40-mile round trip. At ASU, he opened bike valet stations where attendants parked more than 30,000 bicycles on campus and spearheaded efforts to add bike boxes at several intersections on campus, sharrows along campus and adjacent city streets, and a contra-flow bike lane along one of the most heavily bicycle-traveled streets leading to the university.

Soon after Porter’s arrival at ASU, the Tempe campus was designated a Gold-level Bicycle Friendly University by the League of American Bicyclists, and he earned recognition from the City of Tempe, which also earned Gold-level status from the League.

Under Porter’s leadership, the appeals office was reorganized and is now comprised of student staff, cultivating a peer-to-peer experience for Sun Devils.

The International Parking Institute is the world’s largest association of parking professionals and the parking industry.