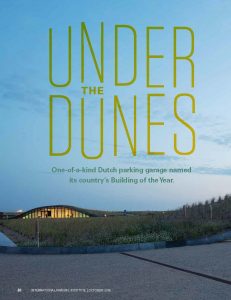 The Royal Institute of Dutch Architects received 125 submissions for its 2016 Building of the Year. The juried contest sees hot competition from all facets of building design, so when the winner was a parking garage, people sat up and took notice. A parking garage? Building of the year for an entire country? You bet—and wait until you lay eyes on it. The underground garage in the small beach town of Katwijk aan Zee is part of a larger effort to protect the village from rising sea levels. That 70-million-euro plan put into play a “dike-in-dune” concept, which buries a wall—and a parking garage—under manmade dunes that look and feel just like the real thing. The two-pronged approach helps protect the town from rising water as waves hit the dunes and their embedded walls and allows the beach to remain a main community focus.

Under the dunes is a garage that was designed to serve the many tourists who visit the town’s sandy shores. The garage is nearly invisible; it was embedded into the surrounding dune environment in a way that was very carefully and deliberately respectful. Those in the know, including Fast Company, call it “incognito architecture,” and it works particularly well for the oblong parking structure. The garage offers plenty of parking for visitors, innovative lighting and design, and lines that led the competition jury to call it an “exceptionally beautiful object” and “virtually flawless.”

The garage was commissioned by the Municipality of Katwijk and designed by architects Royal HaskoningDHV. It contains 663 parking spaces and is largely hidden inside the town’s dunes, which were rebuilt as part of the greater conservation project. By locating most of the parking underneath the natural landscape, architects achieved their goal of strengthening the relationship between the beach and the neighboring village. The organic shape of the dunes was also used to create natural entrances and exits to the structure, easing wayfinding and orientation for drivers and pedestrians, and offer lots of natural light inside. At night, emergency exit lights create beautiful beacons along the shoreline.

Interior lighting and color was used to orient users inside the garage, which is long. Icons were also used in wayfinding for both drivers and pedestrians.

Residents of the town were hesitant when they first heard about the project, but embraced it whole-heartedly when they saw the final results. “People love it,” says Richard van den Brule, MSc, head of the architectural department at Royal HaskoningDHV. He notes that the garage was not only Building of the Year but also won the people’s choice award and an award for best public space.

“For us as a team, the results are really satisfying,” he continues. “During the design and construction stages, we already had a feeling this was going to be a very special project. Now it has become a benchmark for integrated design projects and governance, it’s won several awards, and it’s been published in media around the world.”