What parking professionals need to know now to prepare for a new world of driverless cars.

How will parking differ in the future? If you are investing right now, given 30 to 50 years of 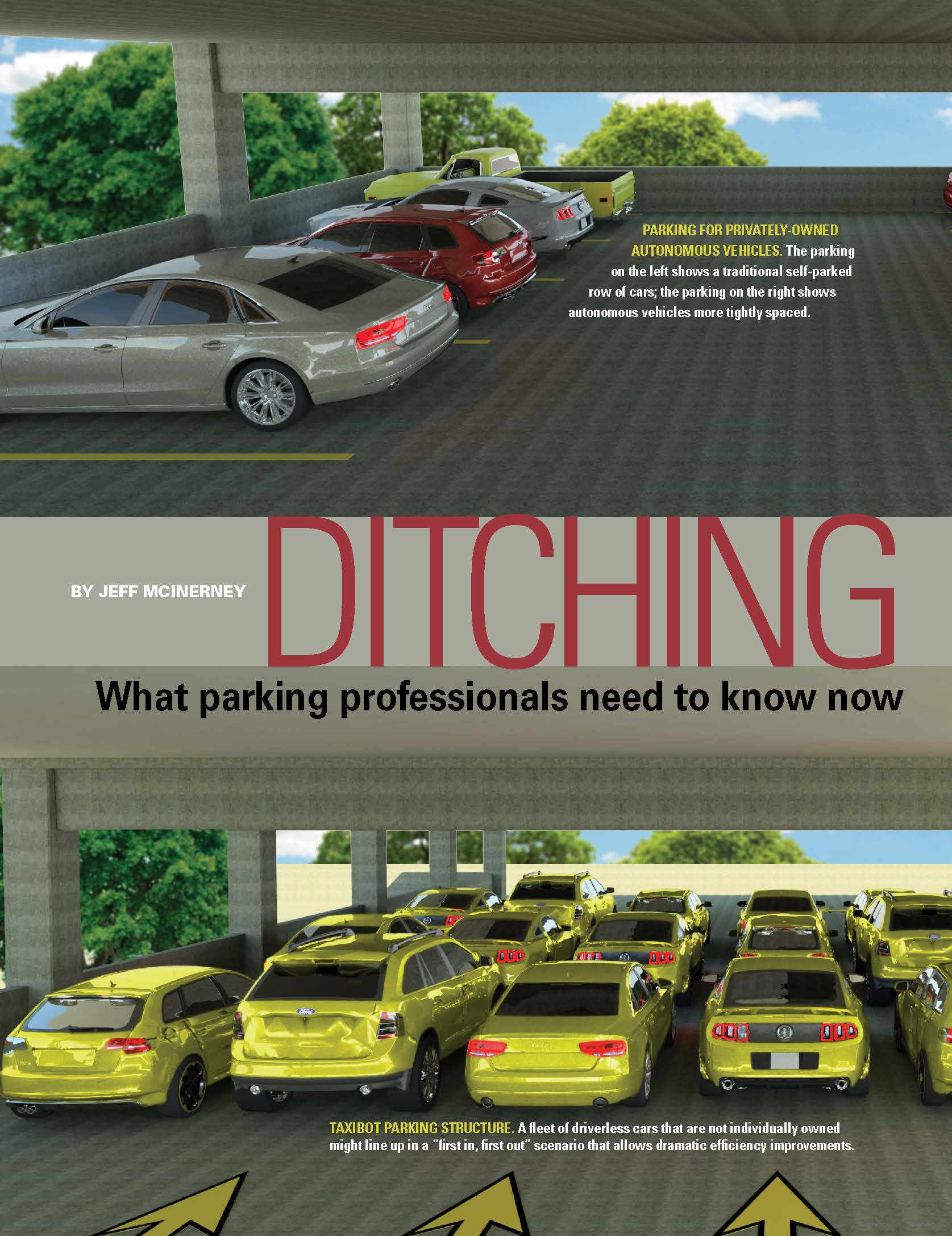 building use, what should you consider to improve the useful life of your investment?

Let’s start by envisioning the city of the future. Imagine a city with wide sidewalks, lush landscape, and pedestrian-friendly hardscape. All of the acres of pavement used for on-street parking have been converted to public spaces. This will all be possible with the advent of the driverless car.

Two types of self-driving cars exist in this imagined future. Some believe the future will consist of a fleet of taxibots endlessly driving from destination to destination. Others believe that car ownership will remain, as it has for decades, a truly American right. In either case, the automobile industry will be transformed in many ways. Very likely, our nation will consist of a segment of the population who gives up car ownership completely while another segment chooses to own individual self-driving cars.

Let’s picture it: Your car drives you to work with a quick stop at your favorite coffee shop. Although there are many vehicles on the road, traffic flow is light because all the vehicles are perfectly synced together. During your relaxing commute, you eat a snack, check emails, and call a friend. You are dropped off right at the front door of your office building. Your car parks itself in a nearby parking structure and will wait to pick you up again at the front door when you are ready to return home. Perhaps you don’t even own a car and just jump in the nearest taxibot and let it drive you to and from work. These self-driving taxis are always available to take you where you want to go.

To have enough vehicles on the road to accommodate peak demand, there will be many excess cars during off-hours, such as while most of us are asleep. Rather than wasting valuable energy having these vehicles endlessly circling, a new kind of parking structure will be needed. Parking structures will not become a thing of the past but will evolve to meet the changing needs of transportation.

As the world of self-driving cars becomes a more practical reality, parking structures will evolve. It’s all about the drop-off! If your car takes you directly to the front door of the facility instead of to the garage, major upgrades to the loading and unloading zone will be required. In a typical office with a 1,000-space garage, approximately half that number of cars might arrive during a peak hour. This means approximately 40 cars will try to drop off their passengers every five minutes. The same idea will apply to retail centers, medical centers, and other buildings. In short, the loading and unloading infrastructures will have to be significantly redesigned to make way for the new era of vehicle use.

The Parking Structure
Driverless cars can drop off and pick up passengers at a passenger loading zone and then proceed to store themselves in the parking structure. This driverless parking will be much more exact than human driving and will not require doors to open while in the parking structure. For these two reasons, much less square footage will be required to park each car. For example, a 2016 Toyota Camry is roughly 6 feet wide. The most common traditional parking space width is 8.5 feet to account for car width, maneuvering room, and door opening. A parking facility designed for driverless cars can streamline some of that space, likely parking five driverless cars in every four traditional parking spaces. This is probably a very low estimate, depending on the development of the cars. Many ideas might lead to even better efficiency; driverless cars might not have side mirrors at all, which would reduce the width needed to park. Driverless cars might also park in the drive aisle and simply communicate with each other to move out the way when a trapped car needs to exit.

The driverless car facility will require less area per parking space. However, it will require a more extensive passenger loading and unloading area closer to the user’s final destination, such as the front of the office building or near stairs and elevators.

The Taxibot Parking Structure
If a parking structure is designed purely to serve as taxibot storage, the efficiency will dramatically improve compared with today’s self-park structures. Typical structures today use about 320 square feet for every car, including drive aisles and pedestrian circulation requirements. A “first in, first out” taxibot storage facility could be nearly twice as efficient. Building code issues involving stairs, elevators, lights, and sprinklers have not been resolved, but in theory, some of these elements could be removed from the structure entirely as human beings will not have to be in this building on a regular basis.

The Near Term
The question, then, becomes what to do with the extra parking capacity area? You may be able to lease your extra parking area to a taxibot operator or a nearby facility with insufficient parking supply. Maybe a partnership is formed in which a nearby old parking structure is demolished to allow for new development and that parking demand is absorbed into your structure.

The extra space could be used for a non-vehicular use. Any facility that is being designed and built in the near future should consider this question. It is prudent to consider building design issues that would be affected by a change in use in the future. As an example, picture a 1,000-space traditional parking facility built today. This type of garage would take approximately 320,000 to 400,000 square feet. For simplicity, assume a 350,000-square-foot parking garage. If five cars can now fit where previously four could, you may have 70,000 square feet of capacity for another use. This is probably a conservative number, as widths of drive aisles and other maneuvering areas can probably be reduced due to vehicle movement accuracy and coordination between vehicles.

To make use of this imagined 70,000 square feet, the building will have to be designed and built in such a way that the new use is viable. Here are some design considerations as we enter a potential era of transition from traditional cars to a new paradigm:

The future of parking structure design will likely include a smaller number of much larger facilities.

If our cars are able to park themselves and pick us up at our whim, then localized parking and, more specifically, street parking will become far less important or even obsolete. A very large parking structure, which serves many types of uses, is a much more effective use of land than numerous small parking facilities throughout a neighborhood. The large facility might include robotic parking, standard self-park slabs, or some combination, but in any case will feature a large capacity so that all cars in the area can get themselves off the street. Expanded functionality such as electric charging and vehicle washing are also likely in this type of facility.

A world without cars is still a dream, and some are very reluctant to accept a future with computers at the wheel. Last year’s tragedy involving a death of a passenger in an autonomous car adds to the concern, although driving records of test vehicles have been exceptional in general.

An urban core with large parking facilities that replace seas of asphalt lots opens up a myriad of exciting urban design possibilities. Because parking structures are such a large investment of money and land, taking some time to consider their evolution is critical to successful land development as we move into the automated driving future.

Jess McInerney, SE, is a principal at Watry Design, Inc. He can be reached at jmcinerney@watrydesign.com.