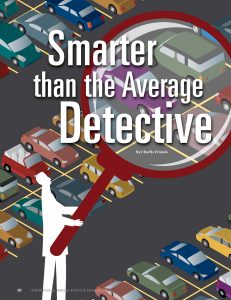 I FIRST ENCOUNTERED the parking industry in the early 1970s as an entry-level accountant. I had to manually count the number of parked cars in each of Denver’s public parking lots between downtown and what is now called the LoDo (lower downtown) District as an internal control check on our parking operator. There wasn’t any technology in those lots—just the ubiquitous honor boxes. Nor could I use any technology to help count the spaces; I tallied my results on daily ledger paper using an adding machine that couldn’t even hold a number in memory. Every month, I would compare my daily counts to the parking operator’s monthly remittance as a way of ensuring the public was receiving all the revenues to which it was entitled.

Data visualization was physical, not digital. I physically had to see the cars and physically interpret the counts. Analysis was difficult—trends and patterns got lost in the noise of big data.

Counting cars in parking lots was a fun task in the summer of 1973, but during that freezing winter, I began to dream of leveraging my bachelor’s degree in a warmer location. I continued for three more years, toiling endlessly, adding columns and rows, and footing and cross-footing totals in sequential reconciliations; at least technology improved calculators to hold a number in memory!

Finally, in 1979, I moved to Florida for my first finance director position. And I was still in the parking business! Honor boxes gave way to parking meters, which were an important source of revenue from the beach parking lots of my small, barrier-island community.

Available Data
Meanwhile, calculators gave way to desktop computers. I became adept at using VisiCalc, the first spreadsheet computer program. It forever changed my way of thinking about the world—no longer were calculations sequential, but simultaneous! Four years later, Lotus 1-2-3 entered the market as a three-in-one, integrated solution that handled spreadsheet calculations, database functionality, and graphical charts—hence the name 1-2- 3. I retired VisiCalc and pasted years of daily parking meter revenue from each of the city’s beaches into Lotus 1-2-3. Once the data were loaded, I started graphing the results. I created both incremental and cumulative year-over-year graphs and incremental and cumulative month-over-month graphs. I generated the graphs citywide and for each beach and quickly became an expert at creating Lotus 1-2-3 graphs. They were good-looking graphs—well, as attractive as Lotus 1-2-3 graphs could be, running on DOS computers, back in 1983.

Something Fishy
One day, as I was admiring the handiwork of my new skill, I noticed something curious in the trends depicted in the graphs. Every year, during one week in the height of each summer season, parking meter revenues plummeted. Multiple views of the data showed me this was not a fluke. There was no logical explanation for this abnormality; the city never declared a parking holiday because parking was a mainstay of our revenue base.

The beaches were never closed. There were no neighboring events that competed for beachgoers, reducing demand. The bridges were neither closed nor down for scheduled maintenance. Nothing seemed to explain the deviation.

Then, one evening, I was reading how Sherlock Holmes wrestled with a problem in “The Sign of the Four.” He asks Watson, “How often have I said to you that when you have eliminated the impossible, whatever remains, however improbable, must be the truth?”

“Aha,” I said to myself, and the next day, I told the police chief he should stake out the parking lots during that one particular week. We found that Midwest-based parking lot bandits had an accomplice working at the meter manufacturer and that partner in crime obtained the new master cylinder key for our parking lots. Every year, the bandits would pay for their Florida vacation by emptying the parking meters. Caught red-handed!

Finance directors are visualizing and analyzing data to better interact not only with their own information but also with their neighboring, regional, and comparison city’s data! And they are able to interact, analyze, and present information with greater velocity—more time to analyze and add value to information and less time spent collecting data. This yields productivity, efficiency, and creativity.

Going forward, new tools will provide city finance professionals with the ability to not only detect and confirm spending inefficiencies, or unrealized revenue, but also to predict, compare, and collaborate on new transformative approaches that will guide the policy decisions for fiscally stable and structurally balanced city governments.

TPP-2016-03 Smarter than the Average Detective